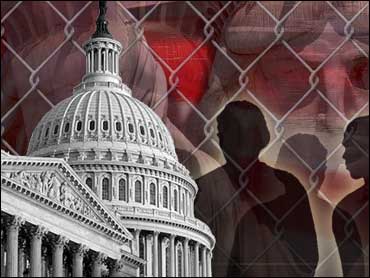 Republican congressional leaders, reacting to their voters' concerns about border security, say an immigration bill offering citizenship along the path outlined by President Bush is unlikely to pass this year.

"Our number one priority is to secure the border, and right now I haven't heard a lot of pressure to have a path to citizenship," House Speaker Dennis Hastert, R-Ill., said Tuesday in announcing plans for an unusual series of summer hearings around the nation on Senate-passed immigration legislation.

"I think it is easy to say the first priority of the House is to secure the borders," added Rep. Roy Blunt, the GOP whip.

GOP leaders were not saying publicly that the president's ambitious plan for a guest worker program and opportunity for citizenship for many illegal immigrants is dead for the year, but several Republicans in both houses were more direct when speaking on condition of anonymity.

"There will be no path to citizenship," said one lawmaker who attended a strategy session in Hastert's office.

Some officials added that Republicans have begun discussing a pre-election strategy for seizing the political advantage on the issue, perhaps by holding votes this fall on additional measures to secure the borders, or on legislation that would prevent illegal immigrants from receiving Social Security payments or other government benefits.

"The discussion is how to put the Democrats in a box without attacking the president," said one aide, speaking on condition of anonymity.

Additionally, GOP aides said Rep. Tom Reynolds, chairman of the House campaign committee, has recently been using polling data to persuade fellow members of the leadership that the public would respond poorly to some provisions in the Senate-passed bill.

"The president is undeterred," White House spokeswoman Dana Perino said after Hastert's announcement of hearings. "We are committed and we have been working very hard with members (of Congress) to see if we can reach consensus on an issue the American people have said they want action on."

Senate Majority Leader Bill Frist, R-Tenn., told reporters he welcomed hearings. "As much examination of the House bill and Senate bill as possible is good," he said.

Sen. John McCain, R-Ariz., a principal author of the Senate-passed measure, offered to testify at House hearings and Sen. Arlen Specter of Pennsylvania, chairman of the Judiciary Committee, said, "I'm hopeful" of a compromise before the elections.

Hastert announced no schedule for the completion of hearings and declined to say whether a House-Senate compromise along the lines of the Bush proposal could come to a vote this year.

"I am not putting any timetable on this thing, but I think we need to get this thing done right," Hastert said.

The House passed border security legislation last year, largely along party lines. By contrast, the Senate approved a bipartisan bill calling for tougher border enforcement; penalties against employers who hire illegal immigrants, a new guest worker program and a shot at citizenship for most of the estimated 12 million immigrants in the country illegally.

The measure won the support of only 23 of the Senate's 55 Republicans, however, and Frist, a likely presidential contender for 2008, is under pressure from conservatives not to agree to a compromise bill they oppose.

Hastert told reporters he had conveyed his views on immigration privately to Mr. Bush in recent days, and other officials said opinions among House Republicans hardened when Republican Rep. Brian Bilbray won a special election this month in the San Diego area. Bilbray campaigned for tougher immigration measures than Mr. Bush favors, and equated the president's approach to amnesty.