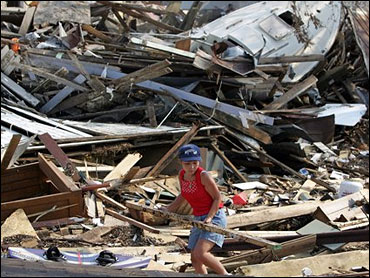 Hurricane Katrina's lasting frustrations are felt strongly along the Mississippi coast, where people who have chosen to stay or are stuck in demolished neighborhoods scavenge for basics each day.

In terms of potential aid, some political rays of sunshine seem ready to shine on Mississippi. A triumvirate of Republican power brokers may give Mississippi first dibs in the post-Hurricane Katrina grab for federal disaster funds even though the federal government focused its initial response to the storm on New Orleans.

The state's senior senator, Thad Cochran, is the new chairman of the Senate Appropriations Committee, the panel charged with determining how much and where the recovery money will be spent.

But until aid branches out to the impoverished rural communities, suffering continues. One of the water-logged areas of Gulfport, Miss., "stinks to high heaven" and may prevent a public health risk due to tons of rotting chickens and pork scattered around, the Biloxi Sun Herald reports. The rotting meat was swept in from nearby State Port, and reportedly smells so bad that even residents whose homes survived the storm haven't been able to return to clean up.

"I have been all over the world. I've been in a lot of Third World countries where people were better off than the people here are right now," retired Air Force Capt. William Bissell said Monday.

Communities of survivors are banning together, such as in one Mississippi town where a tent city dubbed "Camp Katrina" popped up, but aid isn't reaching some rural areas.

"Not one time has anybody come here besides just civilians to give us anything," one tent-city dweller told CBS News correspondent Cynthia Bowers.

Mississippi's junior senator's home — a place where GOP leaders from across the country once bantered about politics from rocking chairs on a porch overlooking the Gulf of Mexico — was flattened by Katrina.

"There's nothing there now," Sen. Trent Lott said of his historic Pascagoula house, which had been 12 feet above sea level. "I found my refrigerator, from my kitchen. It went down the street two blocks, turned left and went into a neighbor's yard."

Television and the Internet have introduced the men to the world in intensely emotional terms.

Before the cameras, Barbour wept, bereft of words, as he tried to describe the scene in the first hours after the storm.

On the Senate floor, the genteel Cochran spoke softly about the storm.

"I don't know of anything that has depressed me more than seeing what I saw yesterday in my state," Cochran said late last week when he presided over an emergency session to send $10.5 billion to the region.

MEMA director Robert Latham says the trailers have been ordered, but he doesn't know when they'll be delivered. In a written statement, Lott says "FEMA and MEMA need to be saying 'yes' to Mississippi's needs, not 'no."

Meanwhile, as supplies are trickling into the state, the National Guard figures people will keep taking food, water and ice as long as they keep giving it away.

Members of the Alabama National Guard will again form an assembly line of sorts in a Mississippi shopping mall parking lot today. They had a steady stream of cars and trucks lined up yesterday, thankful for the cases of water and crates of ready-to-eat meals.

In Alabama, about 3,000 Hurricane Katrina survivors stayed in shelters and between 25,000 and 30,000 found housing elsewhere, most in hotels or with relatives and friends.

More than 17,000 are staying in shelters in Mississippi, and an untold number of others in hotels, churches and private homes.

Residents who returned home to Point Port, Miss., yesterday found their homes destroyed or unrecognizable. The town is in hard-hit Harrison County, home to Biloxi.

Those who stayed through the storm say nobody imagined Katrina would do so much damage to their homes, which were constructed under new guidelines passed after Hurricane Camille hit the area in 1969.

After touring the flattened Gulf Coast with lawmakers from the region, President Bush made it clear that Mississippi's senior politicians have his ear.

"Trent was telling me that we've got to get that port of Pascagoula open so we can get ships of foreign crude oil to the refinery," Bush told reporters.

Cochran and Lott are veterans of both politics and hurricanes. Alumni of the University of Mississippi and lawyers, the sometime rivals have held the most powerful seats in Congress. Helping their state and the region recover from Katrina's wrath is a defining moment in both of their careers.

For Lott, the task is an opportunity to complete his own political recovery.

He was majority leader for five years until 2001, when he made a remark that seemed to praise the late Sen. Strom Thurmond's segregationist past and was forced to step down from the leadership post.

He has rebounded in part by chairing the Senate Rules Committee, being loyal to the party line and building support at home by winning millions of dollars for Mississippi's shipbuilding industry.

A survivor himself, Lott has a new book coming out and harbors ambitions to regain his old post when Majority Leader Bill Frist, R-Tenn., retires from the Senate next year.