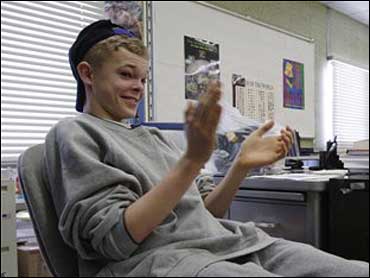 Alone in the gym after practice, Jason McElwain went through his elaborate pregame ritual.

The 17-year-old senior, manager of the Greece Athena High School basketball team, drained a 3-pointer, a double-pump layup and a free throw, kissed the back of his ring finger at center court and sped off to the dressing room to exhort and amuse his teammates.

"You've gotta give it everything you got!" McElwain sang in rap verse. "The winner goes home all happy/The loser goes home and says/`Mommy we lost the game, wah wah wah!"'

McElwain, who is autistic, was back in his role as an all-around motivator on the eve of a sectional semifinal game Tuesday night — handing out water bottles, dispensing tips, helping run drills. Two weeks earlier, he suited up for a game and delivered a jaw-dropping performance.

His play drew national attention, and a flood of calls from Hollywood. His parents have received inquiries from about 25 production companies ranging from The Walt Disney Co. and Warner Bros. to independent documentary filmmakers.

"I don't know what I'm walking into," McElwain said.

In his team's final home game of the season, McElwain entered with four minutes to go. It was his first and only appearance for the Athena varsity team in this Rochester suburb. The 5-foot-6 manager hit six 3-point shots and a 2-pointer and was carried off the court on his teammates' shoulders.

His triumph was captured on a student video that made the rounds of the television networks. The school was besieged with calls and e-mails from parents of children who have autism, a little-understood developmental disorder.

"We have an obligation as a society to find a way to include people with different abilities," said the school's athletic director, Randolph Hutto, whose 12-year-old son, Joshua, is autistic. "This, hopefully, will help open doors for some people, or open some eyes."

McElwain, who didn't begin talking until he was 5, still lacks social skills but has learned to cope well in his teens, said his special-education teacher, Diane Maddock.

"He might talk a little loud, laugh a little too long or not be able the read the body language or even the tone of voice of a person, but it's not a big difficulty," Maddock said. "If you call him on it, he will acknowledge it, say 'OK, you're right, I shouldn't have said that or laughed when I laughed.'"

"This couldn't happen to a nicer kid," she added.

Considered too small to make the junior varsity, McElwain signed on as manager, then took up the same role with the varsity to stay near the sport he loves. Amazed at his dedication, coach Jim Johnson had him suit up for the home finale. There was no guarantee he would play — Athena was battling for a division title — but he got in when the Trojans opened a large lead.

"It was like a big old bucket and I was just hitting them like they were free throws," McElwain said. "I just felt relaxed."

The coach couldn't believe what he was seeing.

"He's been my right-hand man, he's there every day and just getting him the opportunity to suit up was emotional enough for me," he said. "For him to come in and seize the moment like he did was certainly more than I ever expected. I was an emotional wreck."

Because he played in just one regular-season game, McElwain was ineligible for sectional play. But he's not bothered.

"I just want to win as a team, not individually," he said.

What's more, he prides himself on having a lot of friends.

"I'm not really that different," he said. "I don't really care about this autistic situation, really. It's just the way I am. The advice I'd give to autistic people is just keep working, just keep dreaming, you'll get your chance and you'll do it."