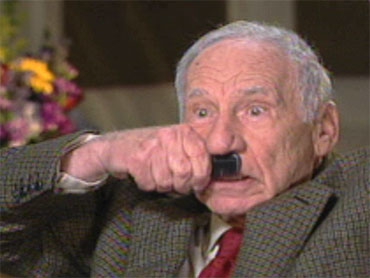 Funnyman Mel Brooks is one of this year's Kennedy Center honorees.

"Early Show" co-anchor Julie Chen sat down with the writer, director, actor, composer, and producer, who has confronted racism, sexism and anti-Semitism, with laughter.

Brooks is one of this year's five honorees rewarded for a lifetime of artistic excellence.

Brooks told Chen being funny is in his blood.

Chen said Brooks began his career at the age of 14 in New York's Catskills, ad libbing a line in a play. He's been trying to get a laugh ever since.

Chen asked Brooks, "You seem to find the humor in everything -- did you find any humor when you were in World War II, getting shot at?"

"If you didn't get killed, it was fun," Brooks said. "I only had about four months of combat. And one day, the Germans broadcast something about (speaks fake German), And I picked up the megaphone and I said, 'Toot, Toot, Tootsie, goodbye. Toot, Toot Tootsie, don't cry.' And when I finished, there was applause from the German side, you know."

Brooks said, 'I was eating a bologna sandwich with the writers of 'Your Show of Shows.' He was trying out this thing, and he came over to me and he said, 'Did you know Jesus?' I said, 'Yeah, thin, nervous -- wore sandals hung around with 12 guys.'

Brooks' fame exploded when he wrote, directed and acted in a series of big-screen comedies.

Brooks told Chen he sees himself first as a writer.

"The blank page is the most death-defying object in show business," he said.

And in the blockbuster, "Blazing Saddles," Brooks took on racial tension with Cleavon Little playing an improbable black sheriff in a frontier town.

Brooks said, "I was trying to say white and black don't mean a bit of difference. It's the character that counts."

His shock humor rankled studio executives, including a head of Warner Brothers.

But many of the executive's edits can actually be seen in "Blazing Saddles." So how did he get it through?

"Audiences saved me," he said. "The laughter was irresistible."

But there's a serious side to Brooks, Chen pointed out. He produced a number of dramatic works including "The Elephant Man," "Frances," and "The Fly." But audiences didn't know it.

Brooks said, "I never used my name, Mel Brooks. I didn't want to confuse the audience."

Brooks also turned his film, "The Producers," into a Broadway musical in 2001, with the encouragement of his wife, the late Anne Bancroft.

"All of my life, I wanted to write song," he said.

Brooks' second musical patterned after a film, "Young Frankenstein," is currently touring. And his body of work, including "Get Smart," and "Spaceballs," has inspired generations of artists.

Actor Jack Black said, "I have tremendous respect for him as an artist, and as a human being."

So does Brooks ever think about slowing down?

"I think of slowing down," he told Chen, "but my body and my mind won't let me, you know?"

Chen remarked, "You don't look at it as work, do you?"

You can see The Kennedy Center Honors next Tuesday, December 29th at 9/8 Central on CBS.