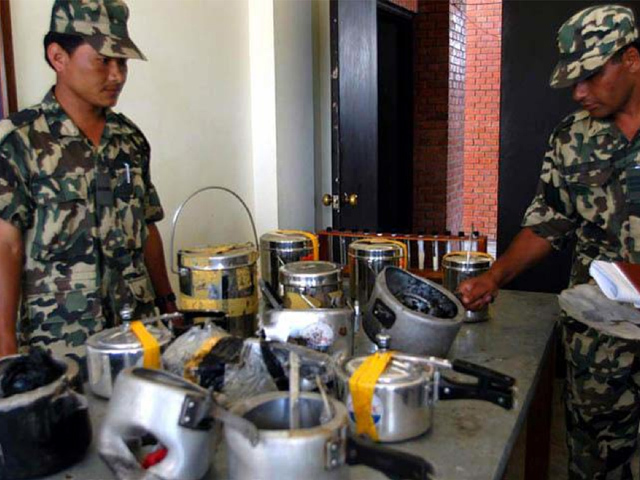 U.S. authorities warned as far back as nine years ago that terrorists could use metal pressure cookers to cause deadly carnage.

The common kitchen cooking implement - found in countless American homes - has emerged as a key component in the horrific bombings that killed three people and injured more than 170 at the Boston Marathon yesterday.

CBS News senior investigative producer Pat Milton learned both of the two explosive devices detonated on Tuesday appears to have been placed in a metal pressure cooker packed with nails and ball bearings.

The pressure cooker was then placed in a black nylon bag or backpack. Investigators also found pieces of an electronic circuit board possibly indicating a timer was used in the detonation of the bomb.

But authorities have been aware for many years that a common kitchen aid could be modified to exact terror.

In 2004 a memo titled "Potential terrorist use of pressure cookers" alerted border inspectors, agents, law enforcement officers and other first-responders that the seemingly-innocuous items could be used to create improvised explosive devices (IEDs).

The memo says the bomb-making technique is commonly taught in Afghan terrorist training camps - and had already led to bombing casualties.

The memo goes on to detail how pressure cooker bombs are made with readily-available materials and can be as simple or as complex as the builder decides.

These types of devices can be initiated using basic electronics such as digital watches, garage door openers, cell phones or pagers.

The memo warns that given the familiar appearance of the pressure cooker it is "often overlooked when searching vehicles, residences or merchandise crossing the U.S. Borders."

The Homeland Security memo offers advice to security personnel if they spot a suspicious-looking pressure cooker: "Don't move the suspect item. Any pressure cooker weighing more than expected may be suspect."

It also advises that it is not safe to transmit radio signals within 50 feet of the item and recommends people within 50 feet should turn off cell phones and pagers.

A pamphlet issued jointly by Homeland Security and the FBI in July 2010 noted that the presence of a pressure cooker in an unusual location such as a building lobby or busy street corner should be treated as suspicious.

"Placed carefully, such devices provide little or no indication of an impending attack," the memo says.

"Alertness and quick reaction to discovery of such concealment devices in unusual locations or circumstances can improve chances of early detection and prevention of an attack."

Pressure cookers have been involved in numerous terror plans prior to the Boston Marathon bombings.

One of the three devices used in the 1 May 2010 attack in Times Square incorporated a pressure cooker containing approximately 120 firecrackers.

In March 2010, terrorists used a remotely detonated pressure cooker bomb in an attack on World Vision International in Pakistan.

A planned attack in Jammu, India in September 2003 was foiled after security officers seizing 88 pounds of explosives in two large pressure cookers.

In March 2003, four Algerians were convicted of plotting to bomb a French Christmas market using pressure cookers packed with explosives.