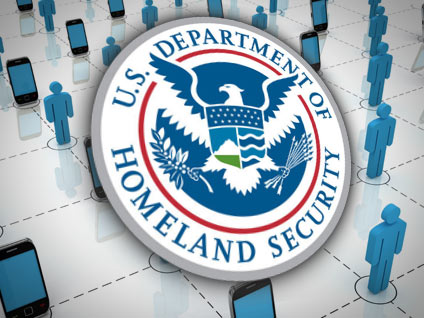 The U.S. Department of Homeland Security monitored social networking sites to harvest information - described as "items of interest" -- during the lead up to Barack Obama's inauguration.

The existence of the surveillance program is laid out in a set of slides obtained by the Electronic Frontier Foundation. The EFF and the University of California, Berkeley's Samuelson Clinic last year filed a Freedom of Information lawsuit against six government agencies in response to news articles reporting government monitoring of social networks.

In the document, DHS details how it would collect and use social network information. It also refers to privacy guidelines it would employ as its operatives went about gathering data for what it called its Social Networking Monitoring Center or (SNMC.) The target list reads like a "Who's Who" of the most popular social networking sites, including the likes of Twitter, Facebook, MySpace and CraigsList, among others. One page, in particular, notes:

While much of the information on public websites is out in the open for others to view, EFF staff attorney Jennifer Lynch still expressed concern about the government collecting "a massive amount of data on individuals and organizations explicitly tied to a political event." "The information is certainly open to whoever comes looking for it. What's concerning, though, is that the government was scouring information on people any reason. From those slides, it looks like DHS was concerned about protecting peoples' privacy - which is great to hear. What we were worried about was how long DHS was holding onto the information after the election and why they were monitoring sites where they didn't think there was a threat. Was it based on race or ethnicity or assumptions about a site? "

DHS said it has since deleted the information.