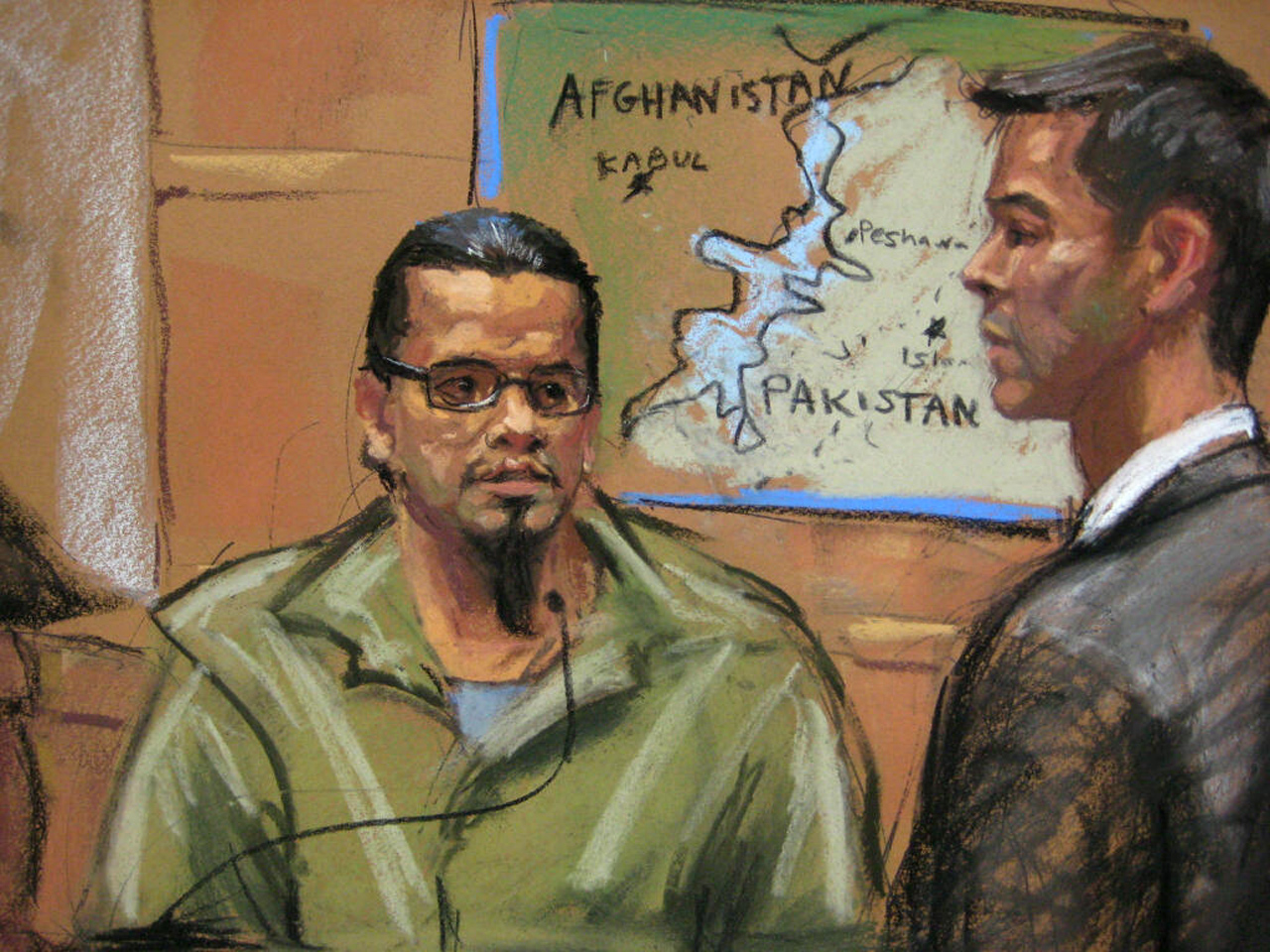 (CBS News) NEW YORK - An American operative for al Qaeda said in open court today that he had hoped to become a martyr while causing mass casualties and a "big economic hit" on the United States.

Bryant Neal Vinas described how he schemed with al Qaeda inside its Pakistan terrorist camps to set off bombs inside a Wal-Mart store and aboard the Long Island Railroad that serviced the suburban New York community where he grew up.

Sporting prison khakis and a goatee, Vinas made his first public appearance since his 2008 arrest in a Brooklyn federal court during the trial of Adis Medunjanin, an alleged accomplice in the foiled al Qaeda 2009 New York City subway bomb plot led by Najibullah Zazi, who pled guilty two years ago and testified last week.

Vinas, 29, a son of South American immigrants, is a Muslim convert who, like Zazi, told the court he became radicalized in part after hearing the recorded lectures of Anwar Awlaki, the al Qaeda-linked imam who was killed by a U.S. drone strike in Yemen.

Vinas flew to Lahore, Pakistan, in September 2007, a year before Zazi would, and when he got to the al Qaeda camp in the Waziristan region of Pakistan, underwent the same basic weapons and explosives training Zazi described -- shooting machine guns, pistols, rocket-propelled grenades, learning how to detonate TNT and C4. Vinas never met Zazi or the defendant.

Vinas said al Qaeda leaders, like operational leader Abdul Hafeez al-Somali, were looking for volunteers for suicidal attacks in the West, and that the terrorist group felt white westerners were ideal suicide bombers because they could blend in easiest.

Vinas said he was told an important personal quality for would-be martyrs was patience, because, for example, the lethal truck bombings of U.S. embassies in Kenya and Tanzania carried out by al Qaeda in 1998 had taken nine months to plan.

Vinas testified that his more immediate goal was deploying to Helmand province, Afghanistan, to fight directly against U.S and coalition troops at war with the Taliban. But Vinas said he got only as far as Lwara, Afghanistan, where he said, he participated in the firing of four projectile missiles at a U.S. base. The attacks missed their target, he said.

In was the summer of 2008 when Vinas discussed a possible LIRR attack with al Qaeda leaders. Vinas said he recommended placing a suitcase bomb that could explode on a moving train, preferably inside the tunnel where a number of train lines converge on Manhattan.

In addition to massive casualties, Vinas said, "If the tunnel was damaged, it would cause a big economic hit on New York."

Earlier, Vinas described pitching an attack on America's largest retail chain to al Qaeda leaders. "I mentioned to attack Wal-Mart would be a good idea," Vinas said, adding he proposed to "hide a bomb in a product you could return, preferably a TV."

Vinas, who said he drew maps and explained train routes to al Qaeda leaders, told prosecutor James Loonam he did not know whether the group ever decided to set the commuter train plot in motion. Soon after his violent grandiose talk, Vinas was arrested by Pakistani police in Peshawar and then turned over to the FBI.

Vinas has pled guilty to three terrorism charges -- conspiracy to murder U.S. nationals, providing material support to a terrorist group, and receiving training from one. He has been a cooperating witness for the U.S. and eight other governments, hoping to be sentenced to less than the life imprisonment he faces.

Someone who did meet bin Laden testified immediately before Vinas -- Saajid Badat, a British accomplice of Richard Reid, who is serving a life sentence in U.S. prison after trying to blow up a Miami-bound airliner with explosives embedded in his shoes in December 2001.

Badat, appearing via a videotaped deposition, said members of al Qaeda, which means "the base," actually referred to their group in Arabic as "Jamaat us Shaikh," meaning the Shaikh's group. The Shaikh was bin Laden. Badat joined in 2000.

Like Zazi, Badat told the court that one of his handlers, was fugitive Adnan Shukrijumah, an English-speaking Saudi who once lived in Florida and remains on the FBI's most wanted list. Badat knew him by the alias "Jaffar Al-Tayar."

Badat said it was Khalid Sheikh Mohammad, the alleged operational coordinator of the September 11, 2001, hijacking attacks on the World Trade Center and the Pentagon, who gave him and Reid the final orders for the shoe bomb airliner attack. Badat said he dropped out of the plot out of fear for himself and his family. He was recently released from prison in the UK.