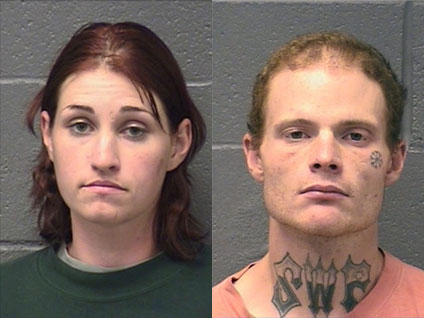 (CBS/AP) PORTLAND, Ore. - A woman suspected in the slayings of four people in a Northwest crime spree has admitted to one of the killings, police in Washington State said Monday.

Holly Grigsby told investigators that she fatally stabbed Leslie Pedersen, who is the stepmother of Grigsby's boyfriend, officers said.

Grigsby's boyfriend, David Joseph Pedersen, is also accused in the killing spree that spanned Washington State, Oregon and Northern California. The couple is suspected in the murders Pedersen's father, David Jones Pedersen, 19-year-old Cody Myers and 54-year-old Reginald Alan Clark, who was found dead from a gunshot wound to the head on Friday.

Police say they believe Grigsby and the younger Pedersen then drove the Jeep south to Oregon with the father's body inside. Days later, authorities say, either one or both of them came across Cody Myers at a jazz festival near the Oregon coastal town of Newport.

Myers was shot in the head and chest outside of Newport and his body was dumped miles away, police say. The black Jeep, with David Jones Pedersen's body inside, was found beneath a steep logging road deep in the Cascade Mountains.

Meanwhile, police did not say how they had linked Reginald Clark's death to the couple.

The suspects were arrested north of Sacramento driving Myers' Plymouth. They pleaded not guilty Friday to weapons possession and vehicle theft and are awaiting an extradition hearing.

Pedersen is a mixed marital arts competitor with a prominent white supremacy tattoo on his neck. He spent the ages of 16 to 31 in one form of incarceration or another, save for a one-year stretch in the mid-2000s. His convictions include assaulting a police officer and threatening a federal judge.

Grigsby spent time in prison for a variety of charges beginning in 2006, including identity theft and unauthorized use of a vehicle. After completing probation, she was again sentenced in 2008 on identity theft charges and served two years.

Earlier Monday, Pedersen told a California newspaper that he killed his father for molesting his sister when she was younger. He told the (Marysville) Appeal Democrat in Yuba County that he did it because it was "his responsibility to make sure it didn't happen again."