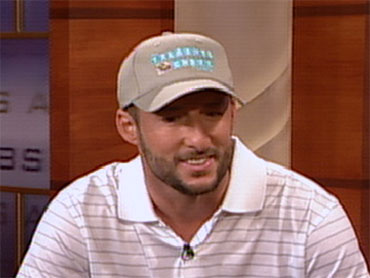 There's nothing sweeter to a golfer than a hole-in-one. However, the chances of that happening are about one-in-30,000. So it seemed like a pretty safe bet to hold a contest: Get a hole-in-one, win $1 million!

However, luck was on Jason Hargett's side this week at a golf charity tournament in Utah. He initially said he didn't plan to play, but then changed his mind -- a decision that would change his life.

At the tournament, six players who hit the ball closest to the hole on a par-3 were invited to participate in the hole-in-one contest. Hargett, who hit second, got a hole-in-one 150 yards away with a nine-iron.

Jason said on "The Early Show" Friday he didn't feel the pressure of actually making the shot. He said it was the pressure of the crowd pressed close behind him that felt "weird."

"You go up, and it's not something you expect to make," Jason said.

Jason said he doesn't remember much from the moment he sunk the ball. Jason hit a hole-in-one last year, but this, he said, was life altering. In fact, when he learned he won, he sent a text message to his wife, Amyee Hargett, telling her their "lives had just changed."

Amyee said, "He told me that he had a chance, that he had a shot at winning a million dollars, so when he sent it, I'm like, 'He won.' And I sent him a text message back to make sure it was true, and he didn't respond, and I called him back and I heard all the people in the background screaming and yelling, and so then I knew that it was legitimate."

Jason said "it's a good feeling" to be a millionaire.

The Hargetts' money will be gradually disbursed over 40 years, with a $25,000 payout each year.

But the money hasn't changed them yet. Jason said he plans to keep his job as a restaurant manager Utah's Ruby River Steakhouse.

The couple has four children ages from 10 to 17. Jason said the money has taken "a lot of pressure off" of paying for their future expenses.

But does the couple plan any extravagant purchases?

Jason said "no." They plan to have the same car and the same house.

However, the avid golfer added, "(I) might play a few different golf courses a little earlier than I thought."

Jason won the Mark Eaton's Celebrity Golf Classic, which helps children and adults fight diabetes. All proceeds will be donated to the Treasure Chest Fund. The Treasure Chest Fund is a nonprofit fund whose primary mission is to provide health care and health care education, for children and adults who suffer from diabetes and diabetes related complications, who would not otherwise be able to afford necessary health care.