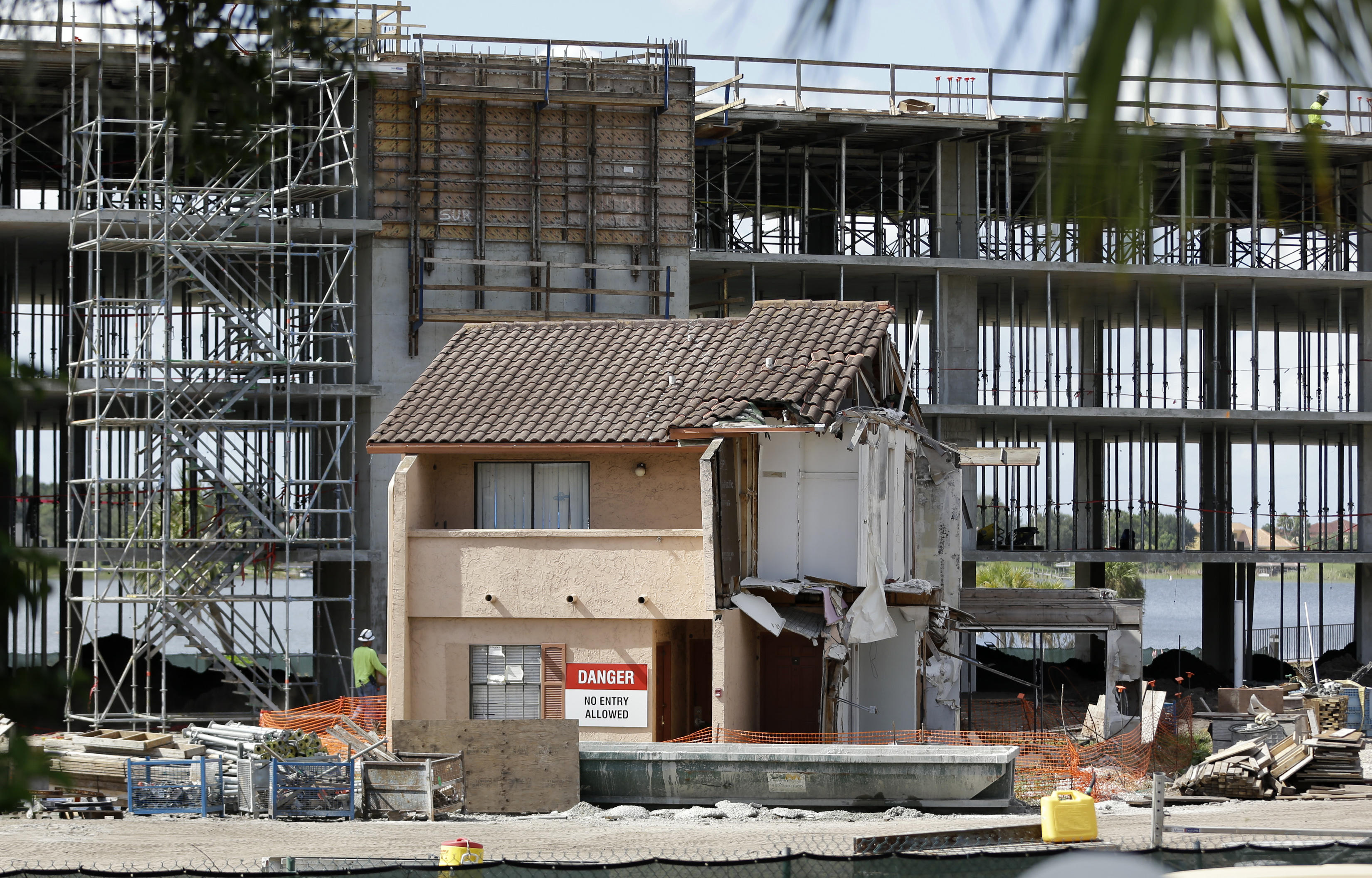 ORLANDO, Fla. -- Julieta Corredor, her two sons and their families have used their two-bedroom townhouse in the heart of Orlando’s tourist district as a place for honeymoons, family gatherings and college housing during the more than 30 years they’ve owned it.

When one of the world’s largest timeshare companies bought up the surrounding condominium units and made entreaties for 81-year-old Corredor to sell hers, the South Florida family refused. Nonetheless, bulldozers for a Westgate Resorts contractor demolished the entire condo development - trees, a tennis court, and a spa - leaving only the Corredors’ 1,125-square-foot townhouse standing.

If the Corredors continue to refuse to sell, they could join real estate “holdouts” like Edith Macefield, who prompted a developer in Seattle to build a five-story commercial development around the home she refused to sell in 2006 and whose house later was used in promotion for the Disney film “Up.”

The Corredors say that their case is a matter of principle on property rights and that they feel bullied by developer Westgate. Westgate officials say the family is being greedy and awaiting a bigger offer. Family attorney Brent Siegel wouldn’t comment on negotiations.

Officials at the timeshare company said they’ve offered to rebuild the unit at the same or a new location and provide $50,000 in furnishings. They’ve presented an offer of a $150,000 cash buyout, and they’ve said they’re willing to offer a comparable, newly renovated unit in a different building. The Corredors have said “no” to each offer.

In China, the fast pace of development has led to a name for these holdout properties - “nail houses” - for the owner’s refusal to be “hammered down.” Some hold out because of attachment to their homes. Some do it for money, though that’s a gamble that doesn’t always pay off if the developer builds around the property.

During the demolition of the complex surrounding Corredor’s townhouse, the Westgate contractor damaged the home’s stucco walls and fractured sections of the red-tiled roof to the point that it was left uninhabitable. A “Danger No Entry” sign now hangs near the front door and a blue tarp covers the side. Jagged sections of wall and remains of a staircase to the second floor are what’s left of the unit next door.

On top of it, the family says, Westgate lied to county officials that they owned all the land so that their development plan would be approved, and the demolition was performed without proper permits.

As Westgate is now halfway toward completing an eight-story, 80-unit timeshare tower around their vacant townhouse, the Corredor family isn’t giving up the fight. The timeshare tower is set to open next June.

“It is our land and it’s our property, and we were never asked to do anything by Westgate on it, and they did whatever they did without our consent,” said Carlos Corredor, Julieta Corredor’s son.

Westgate’s CEO, David Siegel, is one of the richest men in Florida. He and his wife, Jackie, were featured in the 2012 documentary “Queen of Versailles,” chronicling their attempt to build one of the largest single-family homes in the U.S.

Westgate says the Corredors hadn’t stepped foot in the condo for more than a decade and that it had mold and wood decay. The Corredors purchased the property in 1985 for $154,000. The local property appraiser this year gave it a market value of $35,000.

“They’re trying to be the holdout and go for the money,” said Mark Waltrip, the Westgate executive. “Hopefully they’ll stop the charade and start acting responsibly.”

Orlando-area attorney Howard Marks - who successfully litigated against the timeshare company’s parent company, Central Florida Investments, several years ago in a different case about the same condo complex and has nothing to do with the Corredors’ case - said Westgate’s treatment of the Corredors was part and parcel with how the company does business.

“They will just do things, and if there are consequences, they will worry about it in litigation,” Marks said.

After reading about the case, University of Florida law professor Michael Wolf, who has a background in land-use planning and has no connection to the case, said he was concerned that what happened may be “an insult to private property.”

“How could they tear apart the building without doing damage to her unit?” said Wolf, adding that the demolition could be considered a crime or at least grounds for a lawsuit.

After the Corredors told Orange County development officials earlier this year that Westgate didn’t own all the parcels to the property the company was developing, as officials thought, the plan was revoked. Orange County also told Westgate that the demolition work was done without proper permits.

But the county later approved a revised plan that included the Corredor parcel.

The Corredor family appealed to the Orange County Commission to block the revised plan. Overturning the decision would have halted construction on the $24 million project and possibly forced Westgate to tear down what it has already built.

The commission sided with Westgate last month. Commissioner Scott Boyd said the Corredors have been given options by the timeshare giant and now it’s up for them to make a decision.

“This has been a difficult one to watch. ... Mistakes were made,” Boyd said. “I feel at this point there’s not a whole lot that we can do. The options have been laid out pretty clearly.”

The Corredor family is considering taking the case to court, their attorney said.

Waltrip said construction will continue on the timeshare tower.

“They certainly have the right to take us to court, and if they do so, we will gladly meet them there,” he said.