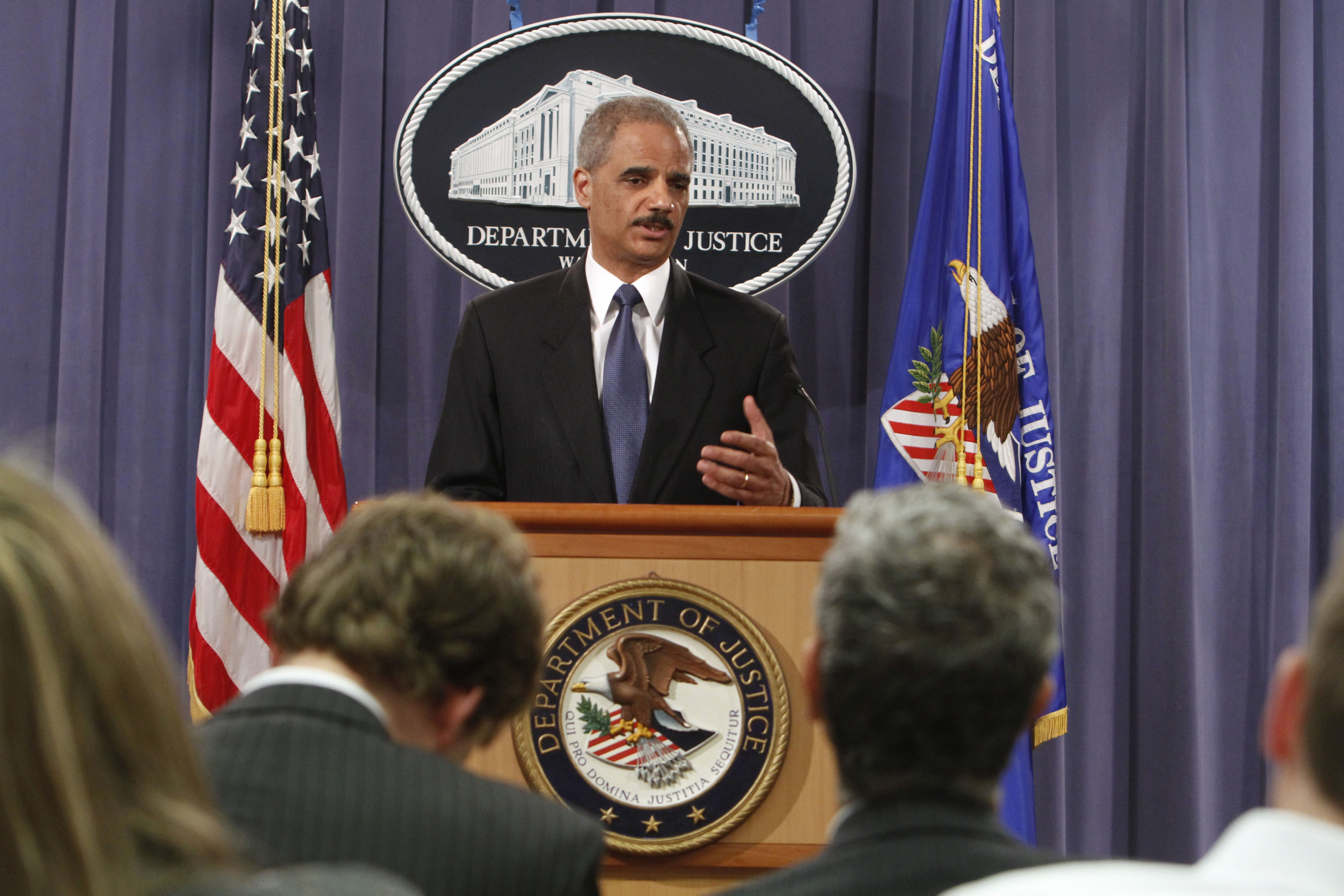 Attorney General Eric Holder today blasted Congress for inappropriately interfering in the decision over how to try Sept. 11 mastermind Khalid Sheikh Mohammad, arguing that a federal trial would have provided the best outcome but that Congress compelled him to move forward with a military commission trial instead.

The attorney general lamented that the Mohammad case, since its beginning, has been "marked by needless controversy."

"The prosecution of Khalid Sheikh Mohammad and his co-conspirators should never have been about settling ideological arguments or scoring political points," he said.

Holder announced today that Mohammad would be tried in a military commission because political interference had impeded efforts to set up a federal trial and justice for the victims of 9/11 has been "long overdue and must not be delayed any further."

KSM to be tried by military commission at Gitmo

He scolded Congress for suggesting that the federal court system could not handle a terrorism case.

"Too many people - many of whom certainly know better - have expressed doubts about our time-honored and time-tested system of justice," he said. "That's not only misguided, it's wrong."

Taking federal trials off the table -- as many lawmakers in Congress have suggested -- could have "serious ramifications," Holder said.

Holder said he has "full faith and confidence" in the military commission system to appropriately handle the case. Yet he pointed out that the system could produce unknown outcomes.

"It's an open question whether someone can plead guilty in a military commission and still receive the death penalty," Holder said.

The attorney general pointed out that federal courts have convicted hundreds of terrorists since September 11, 2001, and that many of them are currently serving sentences in federal prison.

Furthermore, Holder called the case against Mohammad "one of the most well-researched and documented cases I have ever seen in my decades of experience as a prosecutor."

Nevertheless, members of Congress over the past year voiced concerns that holding high-publicity trials for Mohammad and his co-conspirators would imperil national security. They used legislative tactics -- such as blocking Defense Department funding for transferring Guantanamo suspects to U.S. soil for trial -- to thwart the administration. Holder said the administration would seek to repeal those restrictions.

"As the President has said, those unwise and unwarranted restrictions undermine our counter-terrorism efforts and could harm our national security," he said. "Decisions about who, where and how to prosecute have always been - and must remain - the responsibility of the executive branch. Members of Congress simply do not have access to the evidence and other information necessary to make prosecution judgments."

Holder's announcement today elicited a range of reactions from lawmakers and advocacy groups.

Democratic Sen. Dianne Feinstein (Calif.), chairman of the Senate Intelligence Committee, said in a statement, "I very much regret that Congressional action is cutting into presidential authority. I strongly believe the president should have all options available to prosecute alleged terrorists, including both the criminal justice system and military commissions as the facts of the case warrant."

The ACLU called the administration's decision "completely wrong" and a "flip flop" that is "devastating for the rule of law and greatly undermines America's standing abroad."

"This means with certainty that the trial will not be in New York. While not unexpected, this is the final nail in the coffin of that wrong-headed idea," he said.

Senate Republican Leader Mitch McConnell said on the Senate floor that today's news is a "welcome development in the war on terror." He called the idea of holding civilian trials for the 9/11 plotters a "completely horrible idea."

"KSM and the other alleged co-conspirators are charged with war crimes and their cases belong before military commissions, not federal courts here in the United States," they said.

Sen. Jeff Sessions (R-Ala.), a senior member of the Senate Judiciary Committee, welcomed today's news but said in a statement today that the administration remains misguided in its insistence on closing the Guantanamo prison.

"The president's improvident campaign pledge to shutter GITMO was built on the naive premise that softening America's image would somehow soften our enemies' resolve," he said. "That the Administration apparently still clings to this hope--despite the continuing spate of attempted domestic terror strikes and the return of a host of detainees to the war again--suggests, at bottom, a failure to properly understand the radical Islamist threat."