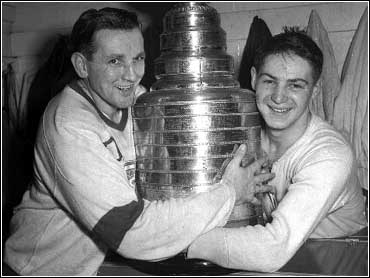 Hall of Famer Sid Abel, who centered the Detroit Red Wings' famed "Production Line" with Gordie Howe and Ted Lindsay on the wings, died in a suburban hospital. He was 81.

Abel began his NHL career in 1938 in Detroit, spending nine full seasons and parts of three others in a Red Wings uniform. The one-time Hart Trophy winner was captain of the team in the 1942-43 season and from 1946 through the 1951-52 season.

Abel spent 32 years in the Red Wings organization as a player, general manager, coach and broadcaster.

Howe said today that Abel was someone the whole team looked up to. Abel was captain when Howe began his 25-year career with the Red Wings in 1946.

"I learned a lot from him from just listening," he said. "When I was around Sid, that's the way it was. He was our captain and leader ... he won in every aspect of the game. He had a full life as far as hockey goes."

"I'm a Red Wing, through and through," Abel said at the time. "Detroit did so many things for me."

He was a member of Detroit's Stanley Cup teams in 1943, 1950 and 1952, and the Production Line was largely responsible for the Red Wings' success.

After a stint as player-coach of the Chicago Blackhawks, Abel took some time off from hockey before taking over as Detroit's coach midway through the 1957-58 season.

Abel's number joined those of Howe (9), Lindsay (7), Alex Delvecchio (10) and Terry Sawchuk (1) in the rafters of Joe Louis Arena.

A native of Melville, Saskatchewan, Abel was inducted into the Hall of Fame in 1969.