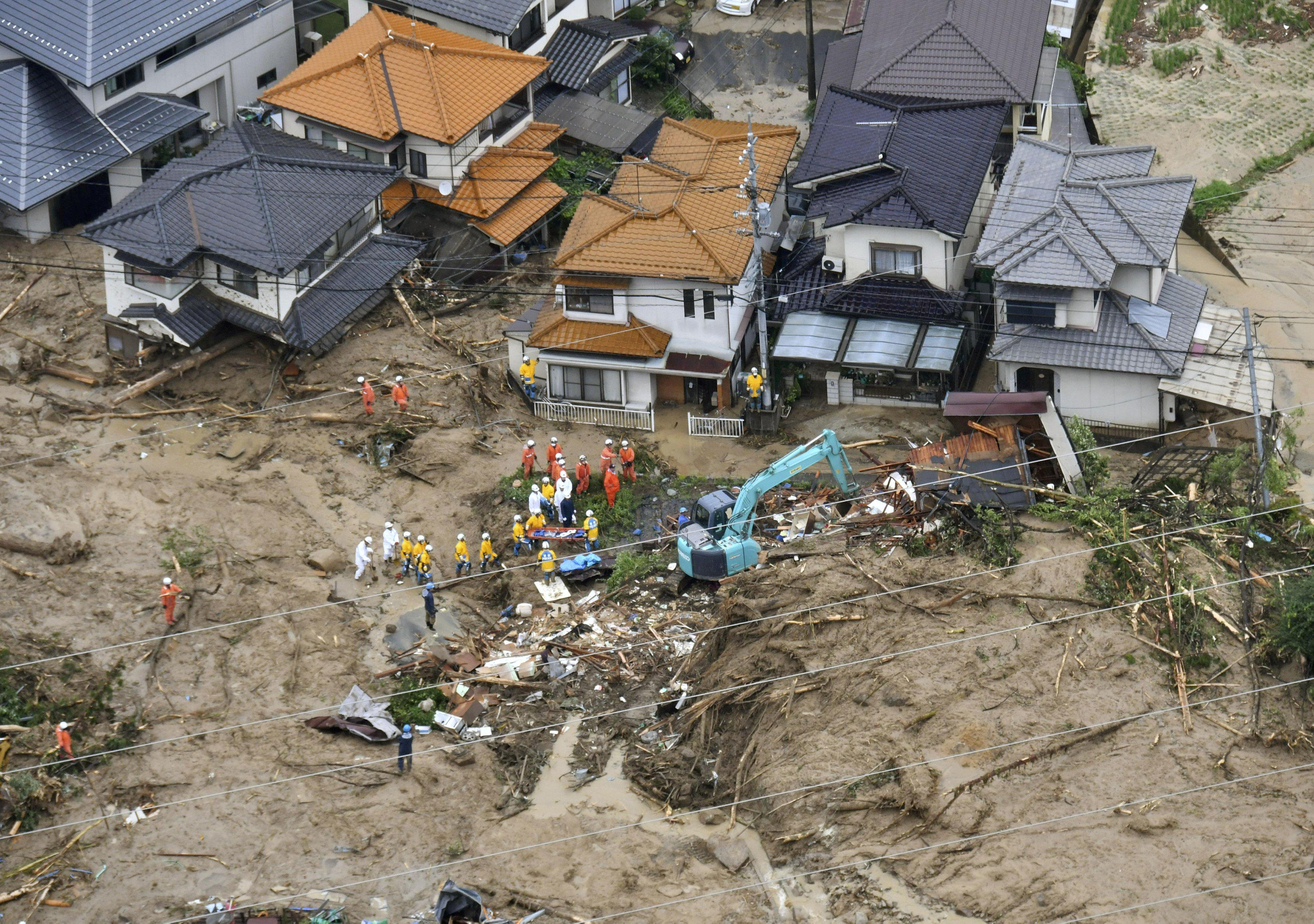 HIROSHIMA, Japan -- People prepared for risky search and cleanup efforts in southwestern Japan on Monday, where several days of heavy rainfall had set off flooding and landslides in a widespread area. Chief Cabinet Secretary Yoshihide Suga told reporters at least 103 people have died or are presumed dead, and 80 people were unaccounted for, many of them in the hardest-hit Hiroshima area.

"We've never experienced this kind of rain before," a weather official said, according to BBC News.

Some residents in Hiroshima prefecture said they were caught off guard as the region was not used to torrents of rainfall, which began Friday and worsened through the weekend. Rivers overflowed, turning towns into lakes, leaving dozens of people stranded on rooftops. Military paddle boats and helicopters were bringing people to dry land.

In Hiroshima, water streamed through a residential area, strewn with fallen telephone poles, uprooted trees and mud. Some homes were smashed. Others were tilting precariously.

"It gives me a chill thinking what could have happened," said Eiko Yamane, who recalled realizing how suddenly water was seeping the tires of the car she was driving. She was able to escape.

"Hiroshima prefecture is normally blessed with mild weather and has few natural disasters so people here have never experienced a situation like this. I guess they're in a panic."

Since Thursday, parts of western Japan have received three times the usual rainfall for the whole of July, setting off floods and landslides.

The assessment of casualties has been difficult because of the widespread area affected by the rainfall, flooding and landslides. Authorities warned that landslides could strike even after rain subsides as the calamity shaped up to be potentially the worst in decades. They also advised people wait for disaster professionals before venturing into damaged homes because of the dangers of exposed electric lines and hazardous material.

"Rescue efforts are a battle with time," Abe told reporters. "The rescue teams are doing their utmost."

The Japan Meteorological Agency said three hours of rainfall in one area in Kochi prefecture reached an accumulated 26.3 centimeters, the highest since such records started in 1976.

A couple was found dead in a farmhouse buried in a mudslide in Kagoshima prefecture Monday, while earlier a woman who was reported as missing after getting trapped in her car was found dead, Kyodo news service reported. Kochi prefecture, on Shikoku, issued landslide warnings almost over the entire island.

The Japanese government set up an emergency office over the weekend, designed for crises such as major earthquakes. Japan has sent troops, firefighters, police and other disaster relief. People have also taken to social media to plead for help.

Okayama prefecture, south of Hiroshima, said in a statement that five people had died, seven were missing and 11 were injured, at least one of them seriously. Nine homes were destroyed, dozens more were damaged, while more than 500 were flooded.