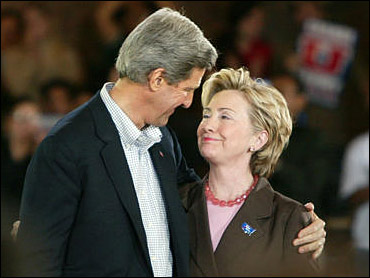 Sen. Hillary Rodham Clinton said Wednesday she has no interest in being Sen. John Kerry's running mate this year. She also said she intends to seek re-election in 2006.

The former first lady, during a wide-ranging radio interview, also said it is time for a woman to be elected president and that she hopes to see it happen in her lifetime.

Pressed on whether she might someday run for president herself, Clinton demurred.

Clinton said while she had met with Kerry advisers about who he might pick as his vice presidential candidate, she declined to share any details about the talks or what advice she had offered.

"I'm not interested," she said about her own possible vice presidential ambitions.

"John Kerry has been clear from the start that, out of respect for those under consideration, his selection of a vice-presidential nominee will remain absolutely private," said Kerry spokesman Mark Kornblau. "John Kerry will choose a running mate who is ready to serve as president, and he will make the announcement at the appropriate time."

While a Kerry-Clinton ticket was always considered a long shot given that they are both from the Northeast -- and she has always said she plans to serve out her full, six-year Senate term that runs through 2006 -- Clinton was emphatic Wednesday about not wanting to be on the Democratic ticket this year.

Also, while Clinton has cranked up a fund-raising effort for her expected re-election bid, she had previously hedged when asked whether she would definitely run again.

"I sure intend to," she said Wednesday on Albany's WROW-AM radio. "I'm loving my job and I really hope I can continue to have the privilege of serving the people of New York."

In December, when asked about her re-election plans, she said: "I'm not thinking that far down the road."

Giuliani, in the face of prostate cancer, dropped out of the 2000 Senate race against Clinton. She went on to easily beat then-U.S. Rep. Rick Lazio.