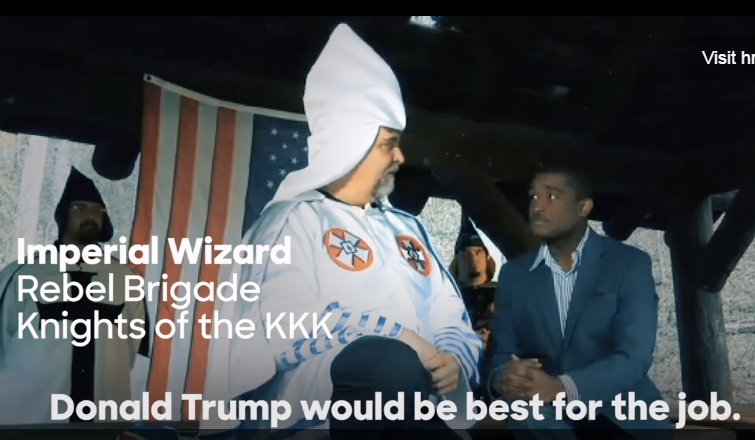 The minute-long web video begins with a soundbite from a man in the full white robes of a KKK member, who the spot identifies as the “Imperial Wizard of the Rebel Brigade, Knights of the KKK.”

“The reason a lot of Klan members like Donald Trump is because a lot of what he believes, we believe in,” he says, as consecutive images flash on-screen of the confederate flag, Donald Trump, and a man at a Trump rally raising his right hand (presumably in a Nazi salute). Over the video, the text reads: “These people support Trump because they believe Trump  supports them.”

“Sending out all the illegals, building a wall, and a moratorium on Islamic immigration -- That’s very appealing to a lot of ordinary white people,” says one man, identified by CNN as the American Renaissance’s Jared Taylor, a white supremacist defending his support for Trump.

In another clip, David Duke, a former grand wizard of the KKK, says: “Voting against Donald Trump… is really treason to your heritage.”

The lengthy spot then features a February interview with CNN, where Trump is asked by “State of the Union” host Jake Tapper: “Will you unequivocally condemn David Duke and say that you don’t want his vote or that of other white supremacists?”

“I don’t know anything about white supremacists,” Trump replies. “So I don’t know.”

Trump and his campaign have repeatedly disavowed Duke’s comments and the KKK since that interview earlier this year.

The web video also hits Trump’s new campaign CEO, Steve Bannon, who runs the controversial Breitbart News website, a safe haven for so-called “alt-right” ideologues. It describes the group using a pundit’s commentary: “The alt-right is the sort of dressed-up-in-suits version of the neo-nazi and white supremacist movements.”

The spot ends on an ominous promise: “If Trump wins, they could be running the country.”

Clinton sent a tweet with the video Thursday. You can watch it in full here:

The video was released just before Clinton delivered a speech in Reno, Nevada linking Trump to alt-right firebrands -- and just as the GOP nominee is ramping up his own efforts to court African American and Hispanic voters by painting Clinton as a “bigot”

The Trump campaign has denied that it has any affiliations with the alt-right, despite Bannon’s tacit embrace of the philosophy through Breitbart.

Asked if the Trump campaign served as a platform for the alt-right, campaign manager Kellyanne Conway told “CBS This Morning”: “No, not at all.”

“We’ve never even discussed it internally,” she said in an interview Thursday. “It certainly isn’t a part of our strategy meetings. It’s nothing that Mr. Trump says out on the stump.”

On Thursday afternoon, the Trump campaign condemned the KKK web video, blasting out a statement from Mark Burns, an African American pastor and devout Trump surrogate.

“Hillary Clinton and her campaign went to a disgusting new low today as they released a video tying the Trump Campaign with horrific racial images,” Burns wrote. “This type of rhetoric and repulsive advertising is revolting and completely beyond the pale. I call on Hillary Clinton to disavow this video and her campaign for this sickening act that has no place in our world.”