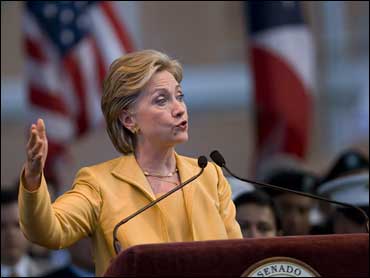 Check out CNN.com for Bill Clinton's vent about how a "cover up" is hurting Hillary Clinton's chances of becoming the Democratic nominee. This is a man who has trampled on his spouse's voice every time, in this campaign, that she's found it.

The women of The Nation are the first to deplore the sexism in media commentary this primary season, but a "cover up"?

Hillary Clinton started this race last year as the one to beat--she had the money, the machine and the name recognition that assured her of quasi-incumbent status. And, indeed, she ran as a quasi-incumbent, an establishment candidate in a change-year election. Yes, there were the Chris Matthews and the Tucker Carlsons and the Mike Barnicles and the Rush Limbaughs and the women who were working out their Clinton hatred through Hillary's candidacy.

Clinton made the mistake of running a top-down campaign in a rules-changing year, and acceding to a sexism within her campaign that advised her not to apologize for her disastrous vote supporting Bush's war resolution. Yes, she was in charge. She could have rejected the guys' advice. But Clinton appears to have bought into the idea that a Commander-in-Chief has to play by "men's rules"--and be tougher than the toughest. If she'd been smart and right, not strong and wrong, how in her right mind would she not have said, I made a mistake when I accepted the word of a man who, it is now widely accepted (except in FoxLand), lied us into a war that has gravely undermined the US's security? John Edwards managed to issue an apology--and he was dueling with a media that had pegged him as "the Breck Girl." Could it be that macho boys like Mark Penn and Bill Clinton counseled Hillary that if she issued honest regret she wouldn't be macho enough to be treated as a serious Commander-in-Chief?

If Clinton had listened to alternative voices --if there'd be some "woman- common-sense" over in her campaign--they might have suggested that she reframe what a commander-in-chief for the 21st century means. That what's needed to deal with the challenges of this world is not more militarism and macho swagger, but a commitment to smart, principled use of non-military tools. After all, how does military might address genocidal conflicts? Or the worst pandemic in world history (AIDS)? Or staggering and destabilizing global inequality? Or, for that matter, the spread of weapons of mass destruction?

Hillary might even have given a speech about what it would mean to elect the first women president. She might have given a superb gender speech--one that people, generations to come, might be talking about just as they will be talking about Barack Obama's magnificent speech on race. But she chose not to. Instead, Clinton chose a different route. And while, on some level, I like Clinton's "I'm fighting for you" persona, and her fighter instinct, that stance came too late in the campaign and needed an anchor in a larger fight than the fate and future of her campaign.

So, opportunities lost, squandered. So, it is with sadness that one watches these last days of what began as an energizing and historic campaign.

The last 72 hours of this campaign, I believe, have given renewed meaning to the term "move on." Ironically, that's a term that first gripped the national imagination at a very different moment in the Clintons' political history. It was in 1998, as rightwing forces converged on Bill Clinton, salivating about the possibility of impeaching a President for improprieties that, while grotesque, never rose to an impeachable offense, that the rules-changing internet operation MoveOn emerged on our national landscape.

It is now time to move on, again. That is not to say that Hillary Clinton doesn't have every right to campaign through the last primaries on June 3. After all, it's been a long time since millions of citizens were participants-- not simply spectators--in our mess of an election process. And that is exciting--as is the record-breaking turnout, the grassroots mobilization and registration of new and once-alienated voters in this campaign.

But when the polls close on June 3, superdelegates should move, expeditiously, to make their decision so that this campaign can refocus on what is at stake in this defining election. And their decision should follow the will of the people--that is, the pledged delegates who are the backbone of a party that --under Howard Dean has crafted a spirited fifty-state strategy seeking to connect with ordinary Americans in every part of this country. That decision, to follow the will of the pledged delegates is in sync with a party that should see its future linked to throwing off the establishment mantle that is truly elitist. After all, as The Nation's Ari Berman has reminded us in his close reporting on the delegate race this charged season, those supers were created as a firewall to protect the party establishment.

And at the end of the day, while Hillary Clinton has the grit, she ain't got the numbers. And the longer her fight drags on--with outlandish attempts to equate the status of the Michigan and Florida delegations with the fraudulent Zimbabwean elections or with the fraudulent Florida recount of 2000--the greater the disservice to the party, the people and the country.

Bill Clinton liked to say-and let me paraphrase-- we are a country in which people who play by the rules should get ahead.

The rules were the rules when the DNC laid them down to all the campaigns. At the time, the Clinton team, like all the others, agreed to abide by them. The rules are rules. Yet, in these last days, with Bill Clinton out there crying "coverup," it's as if Team Clinton has moved the goalposts so often, they're not even in the ballpark--they're somewhere out in the parking lot.

We have big issues and big differences to thrash out in this election. On June 4, I hope Hillary Clinton exits this historic race, gracefully, with dignity. That exit should win her the respect due her from all those in the Democratic party, whether they are Hillary or Barack supporters. It is an exit that is in the interest of the party and the nation. And she must know that how she exits will define the winner in November 2008.

It is time to for this election to turn to the defining issues.

By Katrina vanden Heuvel
Reprinted with permission from The Nation