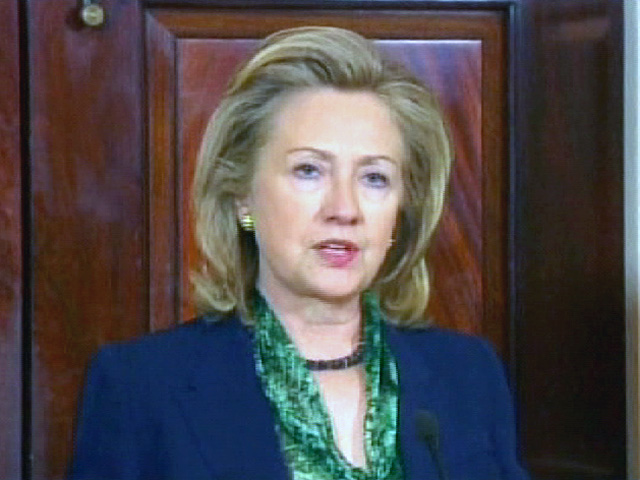 Secretary of State Hillary Clinton said Monday that the killing of Osama bin Laden offered a clear message to al Qaeda's Taliban allies in Afghanistan: "You cannot wait us out, you cannot defeat us, but you can make the choice to abandon al Qaeda and participate in a peaceful, political process."

"The fight continues and we will never waver," she said. "Now I know there are some who doubted this day would ever come. Who questioned our resolve and our reach. But let us remind ourselves this is America. We rise to the challenge. We persevere. And we get the job done."

Noting that many of those killed by al Qaeda worldwide were Muslims, Clinton said the attacks were "motivated by a violent ideology that holds no value for human life or regard for human dignity."

"I know that nothing can make up for the loss of the victims or fill the voids they left," she said. "But I hope their families can now find some comfort in the fact that justice has been served."

Clinton thanked everyone involved in taking down bin Laden and pointed to "our close cooperation with Pakistan," which she said "helped put unprecedented pressure on al Qaeda and its leadership." The comment was notable because the nature of bin Laden's hideout - he was found in a compound outside Islamabad near a military installation - has intensified questions about whether Pakistan had effectively been sheltering the terrorist leader.

The secretary of state, echoing other officials, stressed that "we should not forget the battle to stop al Qaeda and its terror will not end with the death of bin Laden."

"Indeed, we must take this opportunity to renew our resolve and redouble our efforts," Clinton said. She then pointed to the war in Afghanistan, where she said "we are supporting an Afghan-led political process that seeks to isolate al Qaeda and end the insurgency," as well as the situation in Pakistan.

"In Pakistan, we are committed to supporting the people and government as they defend their own democracy from violent extremism," she said. "Indeed, as the president said, bin Laden had also declared war on Pakistan. He had ordered the killings of many innocent Pakistani men, women and children. In recent years the cooperation between our governments, militaries and law enforcement agencies increased pressure on al Qaeda and the Taliban. And this progress must continue. And we are committed to our partnership."

Clinton noted that the killing came amid uprisings against repressive regimes in the Muslim world, saying it came "at a time when the people across the Middle East and North Africa are rejecting the extremist narrative and charting a path of peaceful progress based on universal rights and aspirations."

"There is no better rebuke to al Qaeda and its heinous ideology," she said.