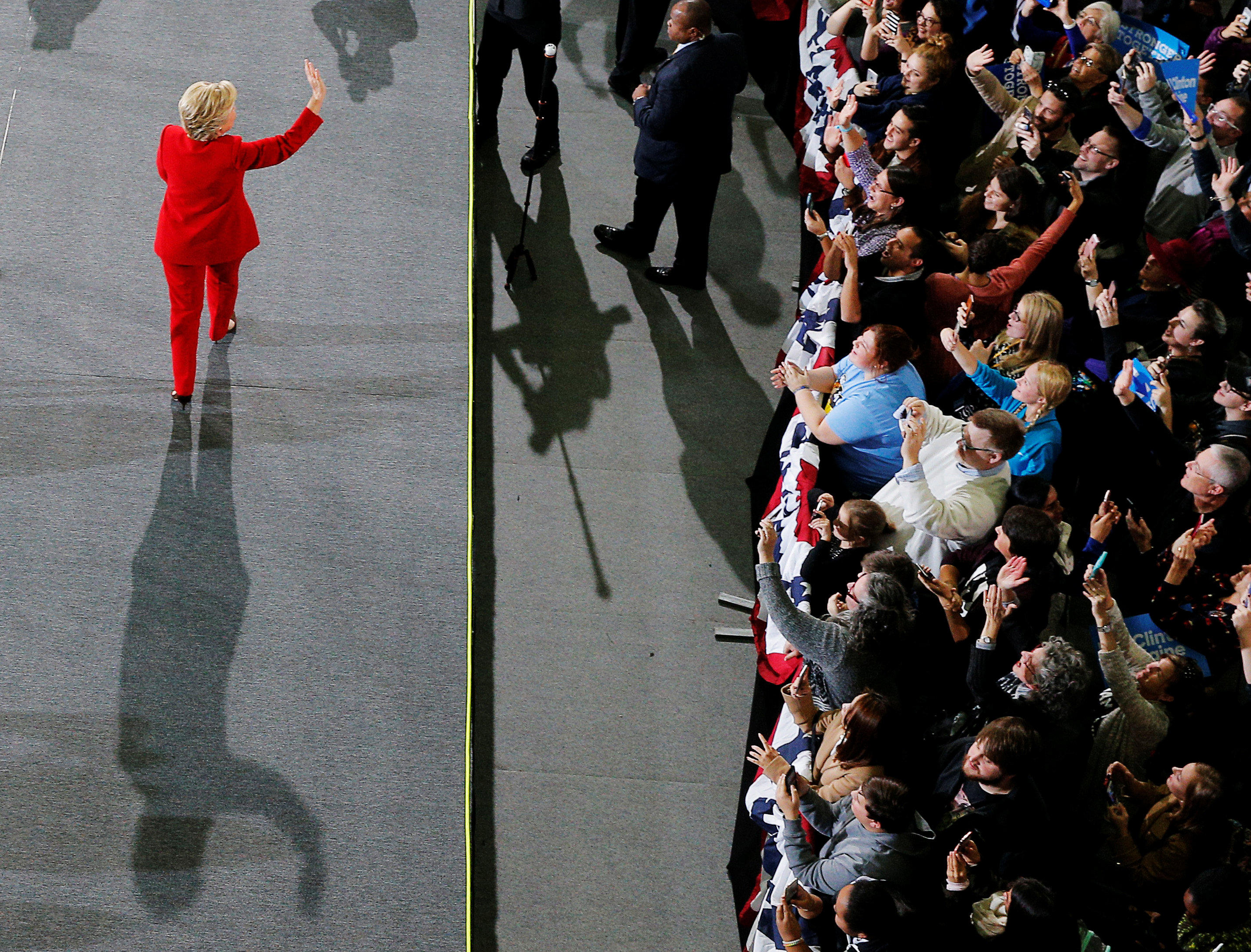 It’s not yet clear whether the emails are pertinent to the FBI’s dormant investigation into whether classified information passed through Clinton’s homebrew email server. But Clinton’s comments Monday were her most pointed yet on the subject, and they underscored her campaign’s decision to fight back aggressively against the FBI’s review.

Clinton accused the FBI of having jumped into the election “with no evidence of any wrongdoing with just days to go.” She said that if the bureau wants to look at the emails from her longtime aide Huma Abedin, “by all means, they should look at them.”

But she insisted the FBI would reach the same conclusion it did earlier this year when it declined to prosecute Clinton and her advisers for their handling of classified information.

“They said it wasn’t even a close call,” she said. “I think most people have decided a long time ago what they think about all of this.”

Clinton’s campaign is banking on exactly that as the email controversy erupts anew in the White House race’s final days. Republican Donald Trump has seized on the FBI decision, gleeful over getting a new opportunity to hammer Clinton’s trustworthiness and perhaps change the trajectory of a race that appeared to be slipping away from him.

Her team has long accepted that many voters simply don’t trust the former secretary of state, but they believe she is viewed as more qualified than Trump to be president - an assertion backed up by many public opinion polls.

Still, Clinton’s advisers were stunned by FBI Director James Comey’s decision to publicly alert Congress that the bureau had new information that could be pertinent to its initial email investigation. Comey’s letter to lawmakers was short on detail, infuriating the Clinton campaign, which accused him of leaving the situation open to inaccurate interpretations.

The investigation appears to center on a laptop belonging to Anthony Weiner, the disgraced former congressman and Abedin’s estranged husband. It’s unclear whether the material on the device was from Clinton. It’s also not known if the emails in question are new or duplicates of the thousands the former secretary of state and her aides have already turned over.

Law enforcement sources tell CBS News that Attorney General Loretta Lynch wanted to delay an announcement - and the process of obtaining a warrant for the new emails - until after the election, in line with her interpretation of Justice Department rules. Still, Lynch stopped short of ordering Comey not to send his letter to Congress - in part because she believed Comey, who felt beholden to his promise to update Congress on his previous testimony - would do it regardless of her directions.

Democrats have robustly rallied around Clinton, including black and Hispanic lawmakers. During a Congressional Black Caucus news conference on Saturday, Rep. Gregory Meeks suggested Comey might be trying to affect the election results.

“Don’t hide in silence,” Meeks said. “Don’t be the one that’s trying to sway an election 10 days beforehand. The American people deserve and we want to know in its entirety what the emails are and what you are investigating.”

If there’s a silver lining for Clinton in the FBI’s actions, it’s that her campaign now has a way to convince Democrats who might have considered skipping voting that their nominee needs their support.

Before Comey’s letter to Congress, Clinton’s campaign had watched with mixed feelings as her standing in poll after poll improved and Trump faltered amid a string of sexual assault accusations.

“In the last week, I think the Clinton campaign was worried it was going to become too easy and that people would feel that,” said Mo Elleithee, who worked on Clinton’s failed 2008 presidential campaign. “Now there’s a reason for all of our supporters to believe it’s going to be hard.”