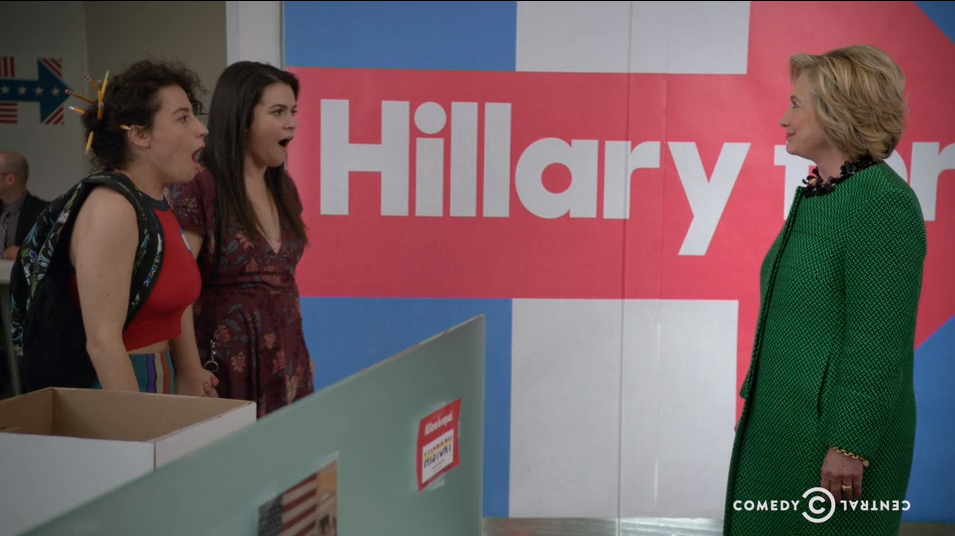 Comedy Central's "Broad City" has had its fair share of random celebrity cameos, including Kelly Ripa, Whoopi Goldberg and Vanessa Williams, but Wednesday's might have been the biggest star yet.

Hillary Clinton appeared on the show, causing characters Abbi and Ilana to have a fangirl freakout.

Though creators/actors Abbi Jacobson and Ilana Glazer cautioned that they were not making a political statement or endorsing Clinton on the show, "Broad City" made it very clear that at least the fictionalized versions of Abbi and Ilana are big supporters.

On Wednesday's episode, Ilana volunteered at Clinton's campaign headquarters, where she took on the name "Ilana Rodham Wexler" before she realized that she would not receive pay for her work.

"I can't afford to volunteer here full-time, but I still want to get the word out," Ilana apologized to Clinton, who she referred to as a "she-king." "So I vow to tweet once a week, 'Vote for Hillary, yas, yas, yas.'"

"That would be great," responded Clinton. "We need to drum up some excitement for the campaign, do everything that we possibly can."

And remember Ilana's Tubeman from Deals, Deals, Deals? Clinton wants to use it for her campaign -- and it turns out Ilana was wrong about the inflatable figure's gender all along.

"Of course, we assumed it was a he," Ilana said as she and Abbi hugged Clinton.

Jacobson and Glazer explained at SXSW that they never really expected to reel in Clinton as a cameo, but their executive producer, Amy Poehler, was able to use her connections and make it happen.