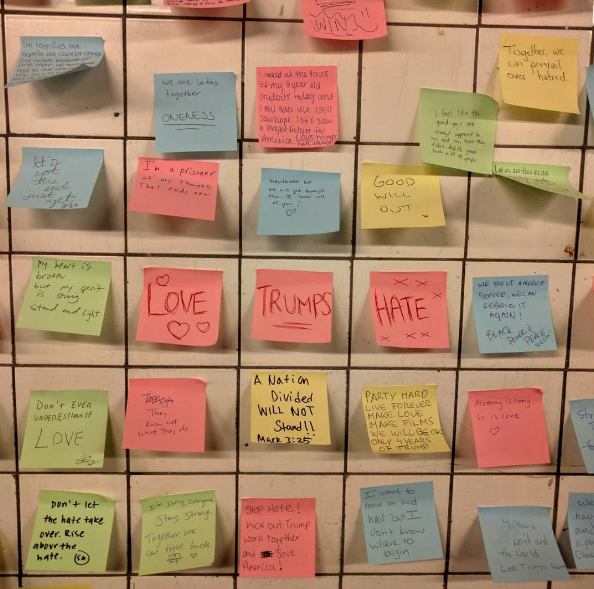 Despite their current state of mourning, many of Hillary Clinton’s supporters are reacting in uplifting ways to the Democratic candidate’s brutal defeat by Donald Trump in Tuesday’s election.

Jenna Lowenstein, the digital director for Hillary Clinton’s campaign, tweeted one photo late Friday about one touching gesture from a supporter.

An anonymous someone sent a thousand red roses to Clinton, Lowenstein wrote, and the former secretary of state passed them out to her staffers at their campaign party.

And outside of Clinton’s campaign headquarters in Brooklyn on Thursday, children and their parents wrote thank you messages to the former Democratic candidate.

New York’s supporters are also finding comfort in kind messages to each other, courtesy of a public project in a Manhattan subway.

One artist, Matthew Chavez, called on New York City inhabitants to “express yourself” with post-it messages on the walls of one subway tunnel connecting the 14th Street stations at Seventh Avenue and Avenue of the Americas.

Some of the heartwarming messages included: “All women must be wonder women now,” “Keep your head high” and “Love is the new black.”