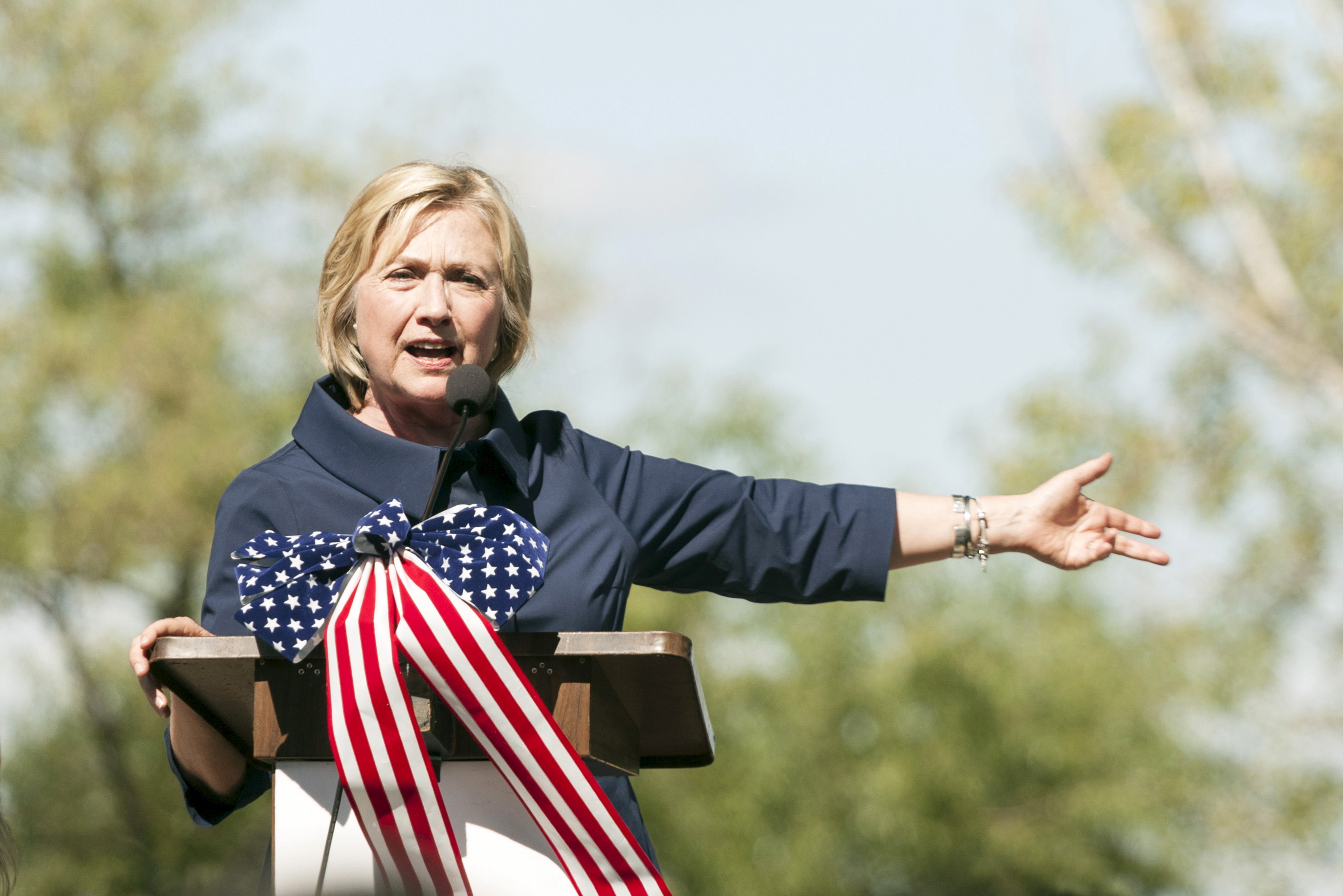 HAMPTON, Illinois -- With a new poll showing the race for the Democratic nomination for president growing more competitive, Hillary Clinton spent this Labor Day hard at work for the union vote in Iowa and neighboring Illinois.

"I know standing here before you that one of my principal jobs as your president will be to defend the right to organize and bargain collectively on behalf of hard working Americans," she said, speaking to a large crowd of Democrats at the Quad City Federation of Labor's Salute to Labor here Monday afternoon in Hampton, just across the Mississippi River from Davenport and Bettendorf, Iowa.

Promising to enforce labor laws and protect pensions, Clinton railed against the Republican "mantra" against unions and said she would make them "pay a price at the polls for treating Americans like second class citizens." Clinton's voice was strained from days of back-to-back campaigning.

Ed Curley, a machinist and union member from Davenport who named labor movement issues as the most important for him in this election, said he thinks Clinton is "very good for labor," but he would prefer to see Martin O'Malley in office. Curley said he has met with O'Malley several times since the former Maryland governor started campaigning in Iowa.

"I've got nothing against Hillary or Bernie," he said, who was wearing an "H" sticker. "I like [O'Malley's] perspective. Realistically, will he get the nomination? Probably not."

Mary Jo Auiff, who works in sales in Bettendorf and said she has a strong family connection to unions, said she backs Clinton "150 percent" despite "all the scandal going on."

"Of course, everybody's gonna talk about it but whatever she did, she did correctly," said Auiff, who was dressed head-to-toe in red, white and blue.

She added, "I know what she stands for."

During her two-day swing through the state, Clinton also met with members and retirees of the American Federation of State, County and Municipal Employees, a union which represents 1.6 million public service employees. The meeting was closed to the press, but Clinton said later at an organizing event in Newton that one of the topics discussed was wage theft, which she mentioned at almost every one of her other stops.

Sen. Bernie Sanders and O'Malley, Clinton's rivals for the nomination, also participated in hour-long town halls with around 30 active and former AFSCME members in Iowa over the weekend. The meetings were live-streamed to members around the country and those members, who are periodically polled at various meetings around the country, were then asked to fill out questionnaires.

In 2007, the group endorsed Clinton in October but according to a senior AFSCME official, there is no specific timetable for an endorsement this year. On Friday at a campaign stop in Puerto Rico, Clinton was confident that her record would win over union leaders and members in due time.

"Labor Day is kind of a pivot for all kinds of political actions during a campaign year," Clinton said. "I think there will be a number of other unions that will be endorsing, but they have to take those decision on whatever timetable they pursue."

The American Federation of Teachers endorsed Clinton in July, becoming the first international labor union endorsement of the campaign cycle. She also earned the endorsement of the International Association of Machinists and Aerospace Workers last month. But Clinton faces a growing challenge from Sanders, whose message is heavily tailored toward working class voters.

National Nurses United, the nation's largest organization of nurses, offered its endorsement to Sanders last month and there is a call from a growing number of members of the Service Employees International Union are calling on their International Executive Board to refrain from endorsing any candidate too early.

"We are supporters of Senator Sanders and believe his voice deserves to be heard," reads a petition signed by 5,000 members of the SEIU. "His campaign is drawing thousands into a movement around the very issues we support in our day-to-day organizing. To make an early endorsement of Hillary Clinton would put our union in direct opposition to this growing movement."

In an email Monday, Sanders told his supporters that he will soon introduce the Workplace Democracy act, "whose sole purpose is to restore and encourage workers' rights to bargain for better wages, benefits, and working conditions."

"When workers have unions, they are no longer afraid to speak up," the email reads. "They have a clear path to getting health care, sick days, basic safety precautions, and better pay. They don't have to live in fear of their employers, and they can work to provide for their families."

Back in Hampton, Andy Waeyaert, who works as an occupational health and safety manager in Moline, said Sanders has earned his vote.

"I like Hillary," he said. "I think she's great but I feel like Bernie is talking about more issues. Hillary seems to be a swirl of drama."