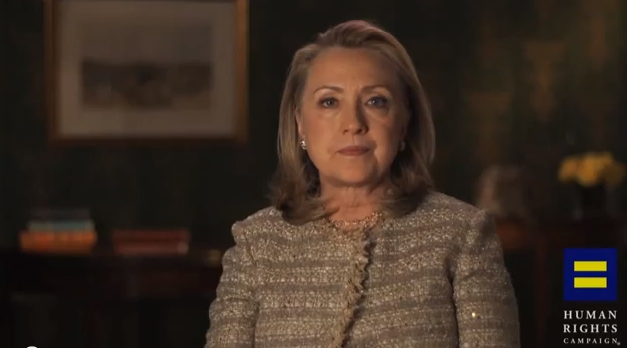 Former Secretary of State Hillary Clinton, considered a top Democratic contender for the 2016 presidential race, formally announced her support for same-sex marriage in a statement today, a move that was widely anticipated after she stepped down from the Obama administration.

In her announcement, which she made directly in a video with the Human Rights Campaign, Clinton argues that gays and lesbians are "full and equal citizens and deserve the rights of citizenship."

"That includes marriage," she said in the video. "That's why I support marriage for lesbian and gay couples. I support it personally and as a matter of policy and law."

Her announcement marks the latest shift over an issue on which she has been evolving for years. In a 2007 questionnaire by the Human Rights Campaign, Clinton rejected the Defense of Marriage Act (DOMA), a controversial bill defining marriage as between one man and one woman, which her husband signed into law and later repudiated by. At the time, though, Clinton's spokesperson clarified to Politico that she was objecting to DOMA's ban on federal recognition of same-sex marriages, but not the idea that states have authority to determine the law independently.

Clinton has long supported civil unions between same-sex couples, and supported the 2011 law that legalized same-sex marriage in New York State. But she cited her experiences traveling the globe as secretary of state, as well as her own daughter's wedding a few years ago, as key to her process.

"Like so many others my personal views have been shaped over time by people I have known and loved," she said. "To deny the opportunity [for marriage] to any of our daughters and sons solely on the basis of who they are and who they love is to deny them the chance to live up to their own god-given potential."

According to the Human Rights Campaign's Fred Sainz, Clinton approached the group about wanting to make this video after leaving the State Department. Sainz cited next week's oral arguments at the Supreme Court over same-sex marriage cases as her impetus.

A spokesperson for Clinton called the timing of her statement "natural" given the looming Supreme Court hearings.

"She has wanted to share her support for the LGBT community in this important effort, and is very happy to be able to do so," the spokesperson said.

According to an ABC News-Washington Post survey released this afternoon, support for same-sex marriage has hit an all-time high, with 58 percent of Americans saying gays and lesbians should be able to legally marry.

Caroline Horn contributed to this report

Which states would restrict or protect abortion rights with Roe overturned?
Lucy Madison