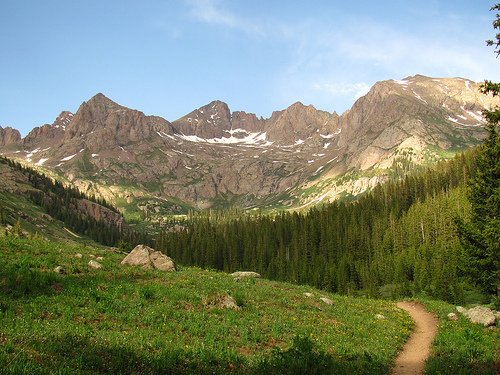 DURANGO, Colo. -- A father and his three children got lost and spent two nights in the southern Colorado wilderness before they were led out of the forest by a couple who came across them far beyond the official search area, authorities said Tuesday.

Mike and Laura Hampshire, who live in northern Arizona, found Dustin Beaver and his three children in the Weminuche Wilderness northeast of Durango and helped them out to a trailhead Monday night, La Plata County sheriff's spokesman Dan Bender said.

Beaver and his 8-year-old twins, a boy and a girl, and his 6-year-old son were all in good shape. Their only complaint was the bug bites they received since setting out for their hike Saturday. It took searchers, who were prepared to look for the family all night, an additional seven hours to hike out, Bender said.

Searchers combing the forest since Monday morning didn't know the family had a tent, food and extra water and that Beaver was able to start a fire each night, The Durango Herald reported.

Beaver's wife reported them missing Sunday night after she found his car parked at another trailhead.

Other hikers have gotten lost in the area, and searchers this week had trouble keeping their bearings, Bender said. The area has several game and livestock trails that lead down into steep, rugged terrain.