A high-stakes political battle is underway in the cash-strapped state of California. At issue is the narrowly-defined liberty people have there to grow and sell a certain plant . . . and the desire of some folks to have the state government TAX it. John Blackstone reports our Cover Story:

In Oakland, Calif., Richard Lee runs a string of businesses, from coffee shops to glass blowing that are helping revitalize the once-decaying downtown.

But Lee's business empire is built on an unusual foundation: Selling marijuana

In the back of his Blue Sky Coffee Shop there's a steady stream of cash buyers, and not just for coffee.

A salesman told customers, "You're welcome to pull the bags out and smell the herb as you like."

What's going on here is illegal under federal law, but permitted under California law that since 1996 has allowed marijuana for medical use.

A dozen other states have similar laws. One customer named Charles said pot is exactly what his doctor ordered.

"So that's what relieves my anxiety and allows me to cope and feel good," he said.

Lee has dubbed his Oakland neighborhood "Oaksterdam" . . . with a nod to Amsterdam and its liberal drug laws. His goal is to make this a tourist destination, with marijuana its main attraction.

"Does that worry people around here?" asked Blackstone.

"No, people around here love it 'cause they see how much we've improved the neighborhood," Lee said.

Next door to where Lee sells marijuana, Gertha Hays sells clothes. She says the dispensary brings people from all walks of life. "There's no particular pothead," she said, "so everyone comes over there."

"So these aren't just druggies in there?" Blackstone asked.

"No, not at all. If you look and see who comes up and down thethe block you'll see it's so diverse," Hays said.

Part of the Oaksterdam neighborhood is a nursery growing a cash crop: Medical marijuana is now estimated to be a $2 to 3 billion business in California.

"Yeah, there's a lot of people making a lot of money," lee said. 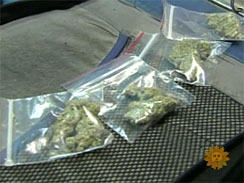 (CBS)
There are now several hundred medical marijuana dispensaries in California . . . and much more marijuana being sold on the street.

"We estimate, overall, [the] California cannabis industry is in the neighborhood of around $15 billion," lee said.

While there is disagreement over the real size of the marijuana market it's big enough to have captured the attention of lawmakers trying to fill a huge hole in the state budget.

Assemblyman Tom Ammiano is pushing legislation to legalize pot so the state can inhale new taxes.

"I thought it was high time, no pun intended, for this to be on the table," Ammiano said. "I'm trying to beat everybody to the punch with the jokes, because I get a lot of 'em," he laughed.

There are many who ridicule the idea, but the state tax board estimates Ammiano's proposed tax of $50 an ounce could bring in $1.5 to 2 billion a year.

"We find that highly unlikely," said Rosalie Pacula, of the Rand Drug Policy Research Center. She says California is likely to be disappointed by the revenue raised on marijuana that now sells for about $150 an ounce.

"If you try to impose a tax that is that high, you have absolutely no incentive for the black market to disappear," she said. "There is complete profit motive for them to actually stay."

The tax proposal, though, has started an unusual political discussion. According to one poll, 56 percent of California voters say marijuana should be legalized and taxed. Even California's Republican governor has not snuffed out talk of legalization.

"No, I think it's not time for that, but I think it's time for debate," Gov. Arnold Schwarzenegger said. "All of those ideas for creating extra revenues, I'm always for an open debate on it."

Check out reports on the debate over legalization in CBSNews.com's special section "Marijuana Nation."
Of course, Governor Schwarzenegger, from his earlier life, does have some experience . . .

"I inhaled, frequently," Mr. Obama admitted on the campaign trail, in a nod to President Bill Clinton's earlier quasi-admission. "That was the point."

And while the president says he is opposed to legalizing pot ("No, I don't think that is a good strategy to grow our economy"), his administration has ordered the DEA to stop raiding state-approved medical marijuana dispensaries.

It's a big change from decades of viewing the plant as the indisputable evil portrayed in the 1936 film "Reefer Madness."

But that old image has been going up in smoke for decades.

It was along for the trip in 1969 in the movie "Easy Rider," and on the cover of Life Magazine. On TV today it's just a part of suburban life in the series "Weeds."

And then there's the growing recognition of marijuana as medicine.

"Marijuana has been a medicine for 5,000 years," said Dr. Donald Abrams of San Francisco General Hospital. "It's only for the last 70 years that it hasn't been a medicine in this country."

Dr. Abrams has been studying marijuana for twelve years and is convinced it is both effective and safe.

"I think marijuana is a very good medicine," he said. "I'm a cancer doctor. I take care every day of patients who have loss of appetite, nausea, pain, difficulty sleeping and depression. I have one medicine that can treat all of those symptoms, instead of five different medicines to which they may become addicted.

"And that one is marijuana, and they're not gonna become addicted to it?" Blackstone said.

But those who have been fighting the war on drugs say that, just because marijuana may be medicine, that doesn't mean it should be legal.

"There's just no doubt about it that the drug cartels and the drug organizations are very much involved in the production and sale of marijuana, said Roy Wasden, police chief in Modesto, Calif., where a lot of marijuana is grown.

"You can be out walking through the national forest, and if you hike into one of these marijuana grows, you'll be at great risk," he said.

And drug fighters warn aging boomers that marijuana isn't the gentle weed they remember. Today's pot is a whole different kettle of fish

"The marijuana of the 1960s and Woodstock is not what's being sold on the streets in the United States today, said Chief Bernard Melekian, head of the California Police Chiefs Association. "The narcotic portion, the THC of marijuana in the '60s, hovered around one or two percent. THC today is around 27 to 30 percent.

"You have a very significantly different plant."

Teaching people to grow that plant is another one of Richard Lee's businesses.

"So you can't plant those seeds until you know what the law is?" Blackstone asked.

Students like Darnell Blackman and Barbara Kramer see an opportunity to do good . . . and to do well . . . by growing marijuana.

"Just like aspirin or ibuprofen or any of those other medications, cannabis is just another way of helping people," said Blackman.

"I thought maybe there was some way that I could get in the ground floor, get ahead of the curve on where this industry might be going," said Kramer.

There are still plenty of obstacles before it's a legal industry. Chief Wasden says this is no time for a surrender in the war on drugs.

"Fewer kids are using drugs today," he said. "We're not losing the war on drugs. Kids are starting to understand the negative, negative consequences of drug abuse. Do we need to introduce another dependency-driven substance into our community when in fact we're making progress?"

But in the community now known as Oaksterdam, the drug warriors are nowhere to be seen . . . as a whole neighborhood goes to pot.