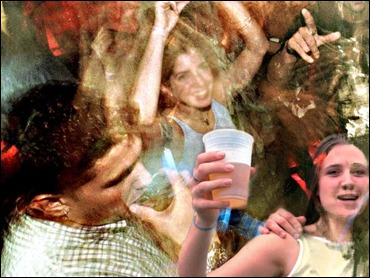 Principal Patrick Cwayna said the school has started giving the students two-week suspensions from sports, a Valentine's Day dance and other extracurricular activities.

Cwayna said some parents already have appealed the suspensions, which do not affect attendance or academics, to James Morse, superintendent of East Grand Rapids Public Schools.

"This is an issue that every high school in the country deals with," Morse told The Grand Rapids Press for a story published Tuesday. "Kids will be kids, and they make mistakes. But they have to be held accountable."

None of the parties in question happened on school grounds, but students involved in extracurricular activities can be disciplined when administrators learn of rule violations, the superintendent said.

"We often get reports from the Public Safety Department if there is a party and our kids are involved," he said. "We bring them down to the office and, in many cases, they 'fess up."

In this case, however, the students were caught after parents reported discovering the photos posted to online journals known as Web logs, or "blogs," and personal Web sites such as Xanga, Myspace and Facebook.

The sites are becoming so popular among middle school and high school students that nearby Rockford Public Schools has started offering parents presentations about them.

"We have to try to educate our parents on what their kids are putting out there," he said. "Predators are a concern because people would know so much about them."

In writing recently about blog sites that cater to teens — and sexual predators — CBS News Technology Consultant Larry Magid warned teenagers to "be very careful about photographs you put on your blog ... Before uploading a photo, ask how you would feel if that picture were seen by your parents, a college admissions counselor, a potential employer, a future boyfriend/girlfriend or spouse or, perhaps, your grandparents."