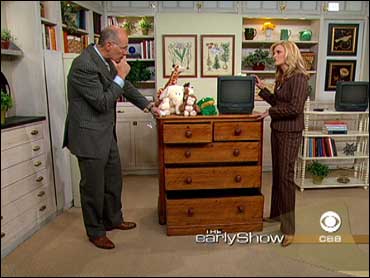 Most parents don't think of TVs or furniture as hazards. But both are hurting and killing kids.

The Consumer Product Safety Commission estimates that 8,000 to 10,000 people are treated each year in the United States for injuries from falling furniture. The CPSC has received reports of 57 deaths associated with furniture tip-overs from January 1999 through March 2005. In just the past two months, there have been three child deaths in the New York area from falling TVs.

pointed out
Wednesday, "It's not just televisions that can topple over and hurt you. Bookcases and dressers can be just as dangerous."

Koeppen visited Judy and Jack Lambert, of Jenkintown, Pa. Their three-year-old daughter, Katie, was killed last year while playing in her bedroom when a large wardrobe fell on top of her.

"I heard a loud crash," Judy said. "I saw the mirrored wardrobe was smashed into a thousand pieces and she was underneath. … I was surprised, very surprised. I mean, these things are a hazard in everyone's home. A hidden hazard."

Dr. Edward Barksdale Jr., a pediatric surgeon at Children's Hospital in Pittsburgh, says many accidents happen when children try to climb up on furniture to get something out of their reach: "They pull out the drawers and they make their way up. They're kind of climbing their Mt. Everest. When they get to the summit, unfortunately, that mountain or a dresser is not fixed and they fall on top of them."

Barksdale says one of the biggest dangers is TV sets sitting on top of furniture. They can lead to some of the worst injuries because when they fall over, they often hit children in the head.

Koeppen says one of the best things you can do to protect your family is to just walk around the house and look at your furniture. If something doesn't look secure, you could use inexpensive safety brackets to secure it to the wall.

Also, don't leave items a child might want on top of a dresser. Kids will pull out the drawers and use them as a ladder

In addition, load the dresser differently. Put the heavier stuff in the bottom to make it bottom-heavy.

Make sure TVs stands are sturdy and appropriate for that size TV. Otherwise, Koeppen warns, that's just an accident waiting to happen.

And teach your kids that the TV is not a toy.

The Lamberts started a Web site in Katie's memory. You can go there to find more information on the dangers of falling furniture.