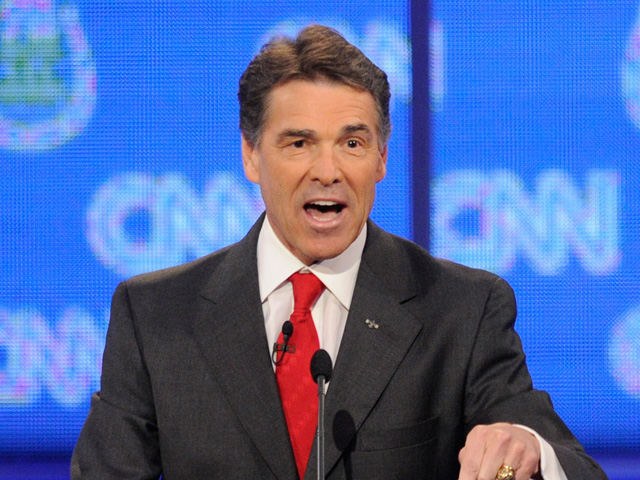 Texas governor Rick Perry, who is embarking on a hard push to recapture the buzz that surrounded him when he first entered the race for the Republican presidential nomination, is doubling down on the "birther" issue and also deeming his rival Mitt Romney a "fat cat."

In an interview with John Harwood of CNBC and the New York Times on Tuesday, Perry was asked why he was keeping the "birther" issue alive. During an interview with Parade Magazine published Sunday, Perry suggested he doesn't "have a definitive answer" to whether President Obama was born in the United States. Mr. Obama released his long-form birth certificate in Apriland there is no evidence to suggest he was not born in the United States, but that hasn't stopped some prominent Republicans, including Donald Trump, from making the charge anyway.

Perry responded, "'It's a good issue to keep alive."

"It's fun to poke him a little bit and say 'Hey, let's see your grades and your birth certificate,'" he added. "I don't have a clue about where the president -- and what this birth certificate says. But it's also a great distraction. I'm not distracted by it."

Perry also went after the man seen by political insiders as his chief rival for the nomination, Mitt Romney. (Though Herman Cain leads both rivals in the latest CBS News poll, Cain's lack of money and organization, along with questions about his seriousness, has led many to the conclusion that he isn't a serious contender.) Back in 1996, when presidential candidate Steve Forbes (who is now a Perry adviser) was pushing a flat tax, Romney suggested the plan was "developed for 'fat cats.'" Since the current tax plan is progressive, flat tax plans generally lower taxes on the rich and raise them on the poor.

Now Perry is pushing a flat tax plan, and he told Harwood that if Romney revives the attack, "He ought to look in the mirror. I consider him to be a fat cat."

Asked about a boon for wealthy taxpayers under his plan, Perry replied, "I don't care about that."

"What I care about is them having the dollars to invest in their companies, to go out and maybe start a business because they got the confidence again 'cause they actually get to keep more of what they work for," he said. "Those that want to get into the class warfare and talk about, oh my goodness, there are going to be some folks here who make more money out of this, or have access to more money, I'll let them do that."

Perry's attack on Romney comes as the Texas governor tries to recover after a series of poor debate performances helped reduce his standing to just 6 percent support in the latest CBS News poll.

Perry, the only candidate who can compete with Romney in terms of fundraising, is planning to start running ads in Iowa this week. He also hired a slew of experienced, hard charging staffers who are seen as in tune with the GOP base and are poised to aggressively attack Romney. Despite Perry's deep national political connections - he's the former chair of the Republican Governor's Association - Perry and his team are casting themselves as the outsiders facing down the establishment's preferred candidate in Romney.