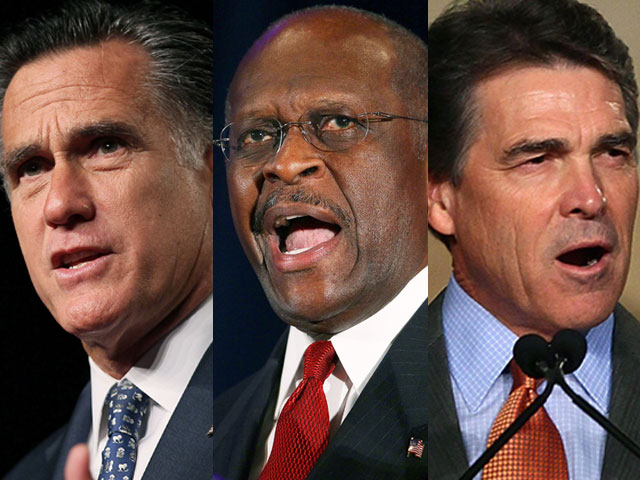 Herman Cain has moved into a tie with Mitt Romney atop the field of Republican presidential candidates, according to a new CBS News poll, while Rick Perry has fallen 11 percentage points in just two weeks.

The poll shows Cain, who stood at just five percent support two weeks ago, now holding 17 percent support among Republican primary voters. That puts the former Godfather's Pizza CEO into a tie with Romney, the former Massachusetts governor, whose support has essentially held steady over the past two weeks.

Perry, meanwhile, has dropped from 23 percent support to just 12 percent support over the past two weeks, a sign that the Texas governor's shaky debate performances - in which he has alienated portions of both the Republican base and the party establishment - have taken their toll.

Eight in ten Republican primary voters said the candidates' debate performances are at least somewhat important to them, and 58 percent said they have watched the debates that have already taken place. Just ten percent of Republican primary voters said they agreed with Perry that the children of illegal immigrants should be allowed to get in-state tuition, a contentious topic in recent debates.

The silver lining for Perry is the race remains fluid: Three in four Republican primary voters who chose a candidate also said it was too early to make up their minds completely. Just 19 percent said they had definitively decided who they would support.

Rounding out the field are Newt Gingrich with eight percent support, Ron Paul with seven percent, Michele Bachmann with four percent, Rick Santorum with three percent and Jon Huntsman with two percent. Eighteen percent said they were undecided or unsure.

At left, CBS News' Brian Montopoli discusses the new poll and the state of the Republican presidential race.

Cain's rise follows a flurry of positive media coverage for his upset victory over Perry in the Florida straw poll last month. The only African-American candidate in the GOP field, Cain has also been getting traction with GOP voters and conservative columnists with his 9-9-9 tax plan - a proposal to replace the current tax code with a nine percent flat income tax, a nine percent corporate tax and a nine percent national sales tax.

The CBS News poll shows Cain as the top choice among self-described conservatives, with 21 percent support. (Two weeks ago, he polled at just six percent with this group.) Romney polls in second among conservatives with 15 percent support, followed by Perry at 13 percent. Cain is also the top choice of Republican primary voters who support the Tea Party, polling at 24 percent to Romney's 17 percent, Gingrich's 13 percent and Perry's 12 percent.

Yet Cain's strong showing comes as he embarks on a book tour that will keep him busy for much of October - a scheduling decision that has some wondering how serious he is about his presidential campaign. Cain is not scheduled to return to the first-in-the-nation state of Iowa until the middle of November, and he has seen significant staff shakeup, most recently losing his respected communications director - a sign that his staff may not see him as mounting a serious challenge for the nomination.

The poll suggests that Romney may gain traction with the argument that he has the best chance to unseat President Obama next year: 32 percent of Republicans say Romney is the candidate most likely to defeat the president. Twenty-one percent cited Perry, while just eight percent chose Cain.

Romney also led the field on who exhibits the strongest leadership qualities, with 26 percent pointing to the former Massachusetts governor. Perry came in second with 23 percent, followed by Gingrich with 14 percent and Cain with nine percent.

Asked who most cares about people, Romney and Cain topped the field, with both cited by 16 percent of Republican primary voters. Four candidates - Romney, Cain, Bachmann and Perry - finished close to each other atop the list of which candidate most shares voters' values.

The poll is being released in the wake of New Jersey Gov. Chris Christie's announcement that he would not enter the race despite pressure from Republicans unhappy with the GOP field (the poll was conducted before his announcement). With the filing deadline for many GOP primaries coming at the end of October and primary voting expected to begin in early January, time is running out for new candidates to enter the race.

In the poll, Republican primary voters were asked if they were satisfied with the current field. Forty-six percent said yes - and just as many said they want new choices.

It's not clear who that new choice might be. There is not a groundswell for the most prominent Republican still openly considering a run, 2008 vice presidential nominee Sarah Palin, to jump in: Three in four Republican primary voters said they would not like to see her enter the race. Just 23 percent said they wanted to see a Palin candidacy.