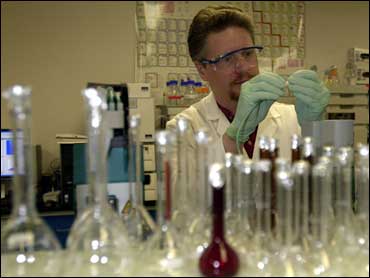 Many of the pills marketed as safe herbal alternatives to Viagra and other prescription sex medications pose a hidden danger: For men on common heart and blood-pressure drugs, popping one could lead to a stroke, or even death.

"All-natural" products with names like Stamina-RX and Vigor-25 promise an apothecary's delight of rare Asian ingredients, but many work because they contain unregulated versions of the very pharmaceuticals they are supposed to replace.

That dirty secret represents a special danger for the millions of men who take nitrates, drugs prescribed to lower blood pressure and regulate heart disease. When mixed, nitrates and impotency pharmaceuticals can slow blood flow catastrophically, leading to a heart attack or stroke.

An Associated Press investigation shows that spiked herbal impotency pills are emerging as a major public health concern that officials haven't figured out how to track, much less tame.

At greatest risk are the estimated 5.5 million American men who take nitrates, generally older and more likely to need help with erectile dysfunction.

The all-natural message can be appealing to such men, warned by their doctors and ubiquitous TV commercials not to take Viagra, Cialis or Levitra.

James Neal-Kababick, director of Oregon-based Flora Research Laboratories, said about 90 percent of the hundreds of samples he has analyzed contained forms of patented pharmaceuticals, some with doses more than twice that of prescription erectile dysfunction medicine. Other testers report similar results, particularly among pills that promise immediate results.

While no deaths have been reported, the AP found records of emergency room visits attributed to all-natural sex pills in Georgia, Chicago, Philadelphia, San Diego and elsewhere.

An elderly man in a retirement community north of Los Angeles took an in-the-mail sample and landed in the hospital for four days. A Michigan man sued the maker of Spontane-ES, blaming it for the stroke he suffered 20 minutes after taking a freebie that was advertised as "extremely safe." Tim Fulmer, a lawyer representing Spontane-ES, said the pill did not contain any pharmaceutical and was not responsible for the stroke.

Mark B. Mycyk, a Chicago emergency room doctor who directs Northwestern University's clinical toxicology research program, said he is seeing increasing numbers of patients who unwittingly took prescription-strength doses of the alternatives, a trend he attributes to ease of purchase on the Internet and the desperation of vulnerable men. He said he wouldn't be surprised if there'd been undetected deaths from bad herbal pills.

Some herbal labels warn off users with heart or blood-pressure problems if they have taken their medicine within six hours; some doctors say 24 hours or more would be safer.

Some men in their 30s who went to emergency rooms after taking herbal sex pills were presumably otherwise healthy, but they showed the transitory side effects of the active ingredients in regulated impotency pharmaceuticals, such as difficulty seeing clearly or severe headaches, records show.

While public health officials don't know the extent of the problem, they agree that incidents are vastly underreported, with national tracking systems capturing perhaps as little as 1 percent of them. Victims may be embarrassed, and doctors rarely ask about supplements.

Since 2001, sales of supplements marketed as natural sexual enhancers have risen $100 million, to $398 million last year, including herbal mixtures, according to estimates by Nutrition Business Journal. Some legitimate herbal mixtures claim to work gradually over weeks; it's the herbals marketed for immediate trysts that often are the problem.

Tight budgets, weak regulations and other priorities limit the FDA's ability to police the products, often promoted via blasts of e-mail spam and fly-by-night Web sites.

"The Internet poses many enforcement challenges," said Dr. Linda Silvers, who leads an FDA team that targets fraudulent health products sold online. "A Web site can look sophisticated and legitimate, but actually be an illegal operation."

In many cases, the ingredients used to alter herbal pills come from Asia, particularly China, where the sexual enhancers are cooked up in labs at the beginning of a winding supply chain. The FDA has placed pills by two manufacturers in China and one from Malaysia on an import watch list.

Pills like Cialis, made by Eli Lilly Co. and ICOS Corp., generally retail at pharmacies for between $13 and $20, while herbals can cost less than $1, up to about $5.

Many health insurance plans provide limited coverage for prescription sex pills, especially for those with health-related difficulties. Few over-the-counter treatments are covered, and herbals aren't likely to be among them, in part because they're classified as foods not pharmaceuticals, said Mohit M. Ghose, spokesman for America's Health Insurance Plans, which represents major health insurers.

Spiked pills have turned up in Thailand, Taiwan, Canada, Australia, New Zealand, Hong Kong, Malaysia, the United Kingdom and the United States, according to testing done by Pfizer Inc., the New York-based pharmaceutical giant that developed Viagra. The company said that 69 percent of 3,400 supplements it purchased in China contained sildenafil citrate, the main ingredient in Viagra. Pfizer didn't check for the patented ingredients of its rivals.

Under U.S. law, because such pills are "dietary supplements," they're far less regulated than pharmaceuticals and face few barriers to market. Viagra, by contrast, underwent years of testing before it was publicly available.

While herbal alternatives often contain exact copies of the patented drugs, some makers tweak the molecules to keep the effect of the original pharmaceutical while avoiding the scrutiny of the FDA and outside testing labs.

Federal officials have only recently stepped up investigations and prosecutions, and in any case, the FDA's recall power is limited. Last week, in response to safety concerns about imported toothpaste, dog food and toys, President Bush recommended that the FDA be authorized to order mandatory recalls of dangerous products.

Currently, recalls are voluntary, and even if the agency determines that a product poses a "significant health risk," a firm may refuse to cooperate. Plus, recalled products are widely offered on the Internet and pills are hard to round up.

Before a product called Nasutra was recalled a year ago by its manufacturer, the FDA had received a 30-year-old man's report of a raging headache and an erection that wouldn't go down. Following the recall, a 32-year-old man reported having spontaneous nose bleeds after taking the pill, records show.

E-mails requesting comment from Nasutra LLC, the company that voluntarily recalled the product in September 2006, were not returned. The FDA says the firm is located in Los Angeles; there is no listed phone number in the region.

During the past year, the FDA has orchestrated eight recalls of "herbal" pills that contained the ingredients found in Viagra, Cialis or Levitra, or their unregulated chemical cousins. Many of the firms were based around Los Angeles, their offices ranging from an unsigned door in a grungy hall on the fringe of downtown to a gated complex near Beverly Hills.

The current owner of the drug's marketing and distributing firm said that after he tried the product, he quit his job at a car dealership and bought the brand name and stock of several thousand pills in 2004 for $450,000. In January, he said, FDA agents seized his stockpile after an agency lab found that Liviro3 contained tadalafil, the main ingredient in Cialis. The man told the AP he'd had no idea the pills were drug-laced.

Company executive Michael Peng had agreed to stop selling Vigor-25 following an FDA agent's visit in late 2004, according to an arrest warrant affidavit. But between then and his arrest in September, at least 4.5 million pills were packaged for distribution, the affidavit said. According to prosecutors, Peng thought he could evade tests simply by switching from the sildenafil citrate he imported from China to Levitra's active ingredient, vardenafil, a shipment of which U.S. Customs intercepted from Thailand.

Levitra is marketed by Schering-Plough Corp. and GlaxoSmithKline PLC.

Peng, who said through his attorney that he was "unaware that there was anything other than natural supplements" in Vigor-25, faces a charge of misbranding, in this instance, claiming that a pharmaceutical is a dietary supplement.

Two other pills, Spontane-ES and Stamina-RX, were made by companies run by Jared Wheat, who's facing federal charges in Atlanta that he peddled knockoff pharmaceuticals cooked in a Central American lab. Prosecutors tried to keep Wheat from posting bail by asserting that he contemplated killing an FDA investigator and bribing a prosecutor.

Fulmer rejected those assertions, which did not lead to charges, saying Wheat is hardworking and nonviolent. Fulmer said Wheat's two businesses are legitimate and continue to be successful.