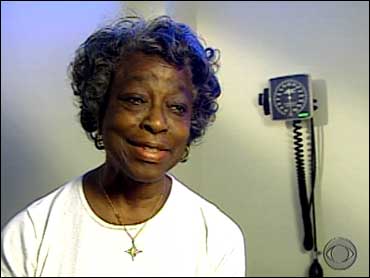 There's good news about heart disease and stroke: You are probably less likely to die from them than ever before.

According to the American Heart Association, there were 160,000 fewer deaths from heart disease and stroke in 2005, compared to 1999.

The AHA predicts, at this rate, by the end of 2008, 240,000 lives will be saved, CBS News medical correspondent Dr. Jon LaPook reports.

In another era, 76-year-old Carrie Mitchell might be dead from a heart attack by now - she had no warning signs.

"I went for an exam, for a physical exam and I failed the stress test. Right away they sent me into surgery," Mitchell said.

"This is all a product of new technology, new devices, new drugs that literally were not available twenty years ago," said Dr. Todd Rosengart.

About half the improvement comes from reduction in risk factors like cholesterol, blood pressure and smoking. The other half comes from better surgery and procedures. But not every trend is heading in the right direction.

Still, Americans can to do better in reducing risk factors, LaPook reports. Coronary heart disease kills almost half a million Americans a year.