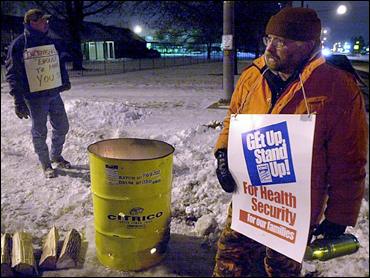 Health care spending growth slowed for the first time in five years in 2002 as patients took on many of the costs previously covered by managed care, a new study found.

However, "the bad news is that it continued to grow at a very high rate by historical standards, 9.6 percent," said Alwyn Cassil of the Center for Studying Health System Change.

That's nearly four times faster than overall economic growth, but still down slightly from the 10 percent jump in 2001, according to the Washington, D.C.-based policy research organization.

"It means health insurance is going to be more expensive, and we know that when health insurance premiums increase in excess of wage growth, people will become uninsured," Cassil told CBS Radio News.

Paul Ginsburg, co-author of the study and president of the center, said he wasn't surprised that growth moderated because the 10 percent surge in 2001 reflected a trend toward loosening managed care restrictions that had contained costs.

"The growth in 2001 was extreme because of the transition away from managed care. But we are a year past that and the change in the system," said Ginsburg.

As managed care loosened its grip on the health care system, hospitals were able to extract larger payments from health insurers.

"Insurers are not in the same position they were in the early 90s," said Caroline Steinberg, vice president of the American Hospital Association, a Washington, D.C.-based trade group. "Patients want a lot more choice so insurers have lost their leverage."

For the second year in a row, hospital costs were the biggest drivers of growth. A combination of hospital inpatient and outpatient care accounted for 51 percent of the growth in spending, the same amount as in 2001.

Overall utilization of hospital inpatient and outpatient services slowed to 5.7 percent last year, after climbing 8 percent in 2001. But hospital prices increased 5.1 percent in 2002, the largest one-year jump since at least 1994.

Hospital costs are increasing as institutions pass on the cost of paying higher salaries to professions where there are huge shortages- most notably nurses and pharmacists. Hospital wage rates grew 5.5 percent in 2002.

"In the wake of this very rapid increase in spending in recent years, employers have moved more aggressively to increase what patients pay when they go to see the doctor or get a prescription filled, by changing their benefit structures," said Corliss.

Ginsburg said all outpatient centers are grouped together, but that hospital-affiliated organizations made up the bulk of those studied in the survey.

Pharmaceutical spending fell for the second year in a row, jumping 13.2 percent in 2002, down from 13.8 percent in the previous year. Ginsburg said several factors included increased use of generics, the introduction of few blockbuster medications and passing on costs to consumers through co-payments combined to muzzle costs. He said patients are more likely to ask for cheaper medications or forgo their treatments when their costs increase.

The study was conducted using data from several sources including the Milliman USA Cost Index, the Towers Perrin 2003 Health Care Cost Survey and the Washington Group on Health and Watson World Wide Employer Survey of Trends in Health Care Marketplace.