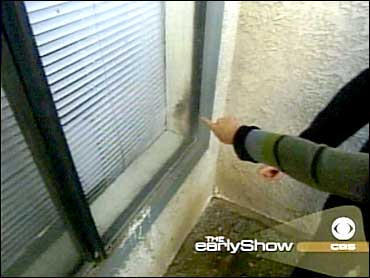 Could mold inside your home or apartment be deadly?

As Jennifer Lair walks her daughter, Skyla, and a friend, to school, she fears Skyla will once again expect her little sister, Neveah, to be home at the end of the day.

"We woke up that morning, and she was gone," Jennifer Lair recalls as she wipes her tears. "It just angers me because I kept telling management, you know, that something was wrong in the apartment."

Lair believes mold in her apartment killed her daughter. The Coventry apartment complex in Bakersfield, Calif., is now the target of a lawsuit. Sixty-eight residents claim toxic mold made them sick.

Environmental lawyer Alan Bell says, "Most mold, as people understand it, is pretty benign stuff like, you know, maybe mildew, or things that you'll see growing on bread. But there are all types. And mold could be some of the most toxic substances known to man."

Lair's attorney, David Poor, says, "We've done testing in approximately 16 to 18 units. In each one of the units, we have found elevated levels of toxinogenic molds."

Environmental lawyers Poor and Bell say they've documented mold in the apartments since 1999.

Kauffman even saw it growing on a window sill. Poor says, "Most of the problem we see is mold growth in the windows."

Bell notes, "This is basically an insidious cancer that's growing from within this complex because of this unbelievable mold infestation."

The apartment management company refused a request by CBS News for an interview, citing the pending lawsuit.

The Lairs took a home video that shows water dripping from their ceiling. They claim maintenance workers made the mold problem worse by improperly cutting into the moldy walls.

Poor says, "When you cut open that sheet rock and you have a release of the mold spores throughout the environment, then you have the level of airborne mold spores increase exponentially. Right after that happened, Neveah died as a result of respiratory failure."

While the lawsuit claims toxic mold killed the little girl, the coroner's report lists the cause of death as pneumonia. It does not specify what might have caused the pneumonia.

At that time, Kern County Coroner James Malouf says, he did not find any evidence that toxic mold killed Neveah.

But he says, "Now, since the litigation has come up, I know that there's been a lot of holds placed on what tissue that we have. And I think that they're probably going to be doing some different types of tests to see if it's present."

Poor says, "The kids in these apartment complexes are being stricken with what local doctors call pneumonia, double pneumonia."

Wendy McCown's four kids are doing better since they moved out of a moldy apartment.

She says, "His tonsils and his adenoids were so swollen, he couldn't breathe."

Asked if she is sure that it was mold in the walls that made her kids sick, McCown says, "Absolutely. When he went to the emergency room, it was the day after we had re-exposed to it. He was laying on the floor, and he was just gasping for air."

The Lair family is now living in a hotel. After Neveah's death, they moved to anohter unit in the same apartment complex, but the mold re-appeared and their youngest child, Jerrit, became seriously ill.

He takes Alboterol. He's on Pulmicort, a nebulizer, and Prednisone.

Though the family moved out, their possessions are still in the contaminated apartment, including the urn with Neveah's ashes.

Lair says, "This is my daughter's hutch with some of her things in it. Her tap shoes, she loves to tap."

Wiping her tears, Lair continues, "She was such a good kid. She stood out from the rest of them. She was happy all the time. She was always happy until she started getting sick.

"It makes me mad, because it all could have been prevented, you know?"