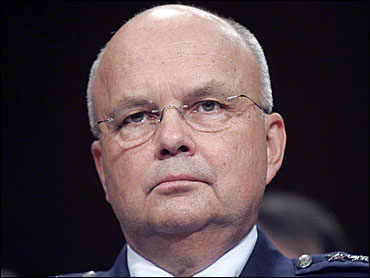 CIA Director Michael Hayden said Wednesday that Iranian policy, at the highest government level, is to help kill Americans in Iraq, the boldest pronouncement of Iranian involvement by a U.S. official to date.

Hayden made the statement in response to a student question while delivering the Landon Lecture at Kansas State University.

"It is my opinion, it is the policy of the Iranian government, approved to highest level of that government, to facilitate the killing of Americans in Iraq," Hayden said. "Just make sure there's clarity on that."

In recent weeks, U.S. officials have ratcheted up their complaints that Iran is increasing its efforts to supply weapons and training to militants in Iraq.

Military commanders in Baghdad are expected to roll out evidence of that support soon, including date stamps on newly found weapons caches showing that recently made Iranian weapons are flowing into Iraq at a steadily increasing rate.

Another senior military official said the evidence will include mortars, rockets, small arms, roadside bombs and armor-piercing explosives - known as explosively formed penetrators or EFPs - that troops have discovered in caches in recent months. The official, who spoke on condition of anonymity because the evidence has not yet been made public, said dates on some of the weapons were well after Tehran signaled late last year that it was scaling back aid to insurgents.

Adm. Mike Mullen, chairman of the Joint Chiefs of Staff, has said the U.S. prefers to resolve the issue through other pressures, but that it has the combat capability to strike Tehran, if necessary.

Hayden also said the recent Iraqi offensive in the southern Iraqi city of Basra should stand as a clear indication to Iraq's neighbors that it intends to be a credible force in the region. He added that such activities boost the credentials of the Prime Minister Nouri al-Maliki's government.

During his 40 minute lecture, Hayden said China was likely to be a political and economic competitor by the middle of the century but should not be treated as an "inevitable enemy" of the United States.

He warned, however, that China likely would be viewed as an adversary if Beijing uses its growing global influence in support of its own narrow interests at the cost of peace and economic stability.

"If Beijing begins to accept greater responsibility for the health of the international system - as all global powers should - we will remain on a constructive, even if competitive, path. If not, the rise of China begins to look more adversarial," he said.

China's military buildup, which is intended both to counter U.S. military capabilities and to intimidate an independence-minded Taiwan, is as much about projecting an image of strength and "great power status" as it is to gain a tactical or strategic military advantage, he said.

"After two centuries of perceived Western hegemony, China is determined to flex its muscle," Hayden said.

He also predicted continued tension between the United States and Europe, an old alliance now strained by different views about terrorism.

"It is not yet clear when or if the United States and Europe will come to share the same views of 21st-century threats - as we did for the last half of the 20th century - and then forge a common approach to security," Hayden said.

The United States considers itself a nation at war, in pursuit of terrorists wherever they are, he said.

"In much of Europe, terrorism is seen differently: primarily as an internal, law enforcement problem, and solutions are focused more narrowly on securing the homeland," Hayden said.

Sharp population growth over the coming decades, particularly in Asia, Africa and the Middle East, will strain resources, increase immigration and could result in an increase in violent extremism and civil unrest, he said.

The populations of Afghanistan, Liberia, Niger and the Democratic Republic of Congo are expected to triple in 40 years, and those of Ethiopia, Nigeria, and Yemen will more than double, he said.

Demographic changes, a rising China, and the evolving trans-Atlantic alliance will shape American security and foreign policy through the middle of this century, Hayden said. He called on Americans to learn the languages and cultures needed to meet the new challenges, in the same way the United States developed its Soviet expertise during the Cold War.

"Large parts of the world - including those that will hold more sway in the future - do not share all of our ideas," Hayden said. "While we cherish and live our own values, we must know and appreciate those of others."