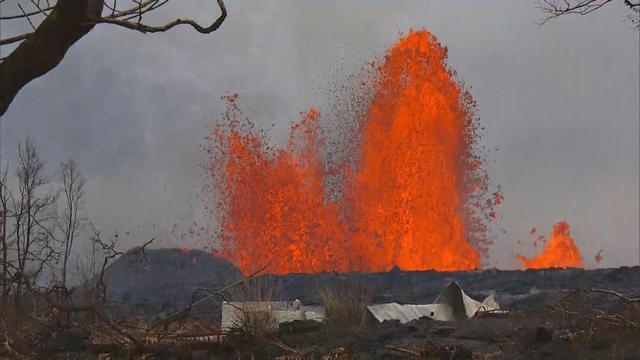 Fast-moving lava from Hawaii's Kilauea volcano forced new emergency evacuations Tuesday night. One of the most active fissures is producing massive lava flows that have cut off major highways, shut down a power plant, and destroyed dozens of homes. The 2,000-degree molten rock exploding from the ground is creating rivers of lava that are literally changing the landscape.

The molten rock forced the closure of Highway 132, a major artery for people who live here that also leads to the main access road for the area's geothermal power plant.

As she got ready to leave her home in Leilani Estates for perhaps the last time, Marianne Farrell showed CBS News' Carter Evans the rocks with glass fibers that can irritate the skin and eyes and lungs if inhaled.

"It's like glass, it's fragile, it's lightweight," she said of the material that was all around her house.

"It's definitely Mother Nature recreating. So we are at her mercy," Burmeister said.

Because there are so many active fissures right now, there's certainly no word on when any of the blocked roads might reopen and scientists aren't giving any prediction on when the eruption might end.