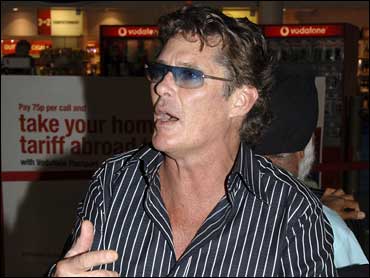 David Hasselhoff has demanded an apology from a British tabloid for publishing a story that claimed he was drunk at a Hollywood nightclub while celebrating his victory in a child custody battle.

Hasselhoff, star of TV's "Baywatch" and "Knight Rider," was awarded custody of his daughters Hayley, 14, and Taylor, 17, by a Los Angeles judge on June 15. The 54-year-old actor had been in a long-running legal battle with ex-wife Pamela Bach.

The Sun's story, published Tuesday, claimed a "boozy" Hasselhoff was knocking over tables and demanding drinks from strangers at Les Deux nightclub in Hollywood.

Hasselhoff denied the allegations and is demanding a printed apology stating the article was false.

"He did not do what they said he did," Hasselhoff's British lawyer, Simon Smith, said. "He would not behave like that in public."

Smith said Hasselhoff wants the apology to run on "Page 3" of The Sun, which features a daily photo of a topless woman, because that's where the original story ran.

If the newspaper refuses, Smith threatened to file a lawsuit at Britain's High Court on Monday. The Sun has removed the article from its Web site. The publication wasn't immediately available for comment.

On May 7, Superior Court Judge Mark A. Juhas put a hold on Hasselhoff's visitation privileges for two weeks after the public leak of a videotape showing an apparently drunken Hasselhoff struggling to eat a cheeseburger while on the floor of his home.

One of his daughters is heard chastising him.

Hasselhoff, a recovering alcoholic, has said he was humbled by the support he received after the videotape aired.

The actor, who is a judge on NBC's "America's Got Talent," married Bach in December 1989. He filed for divorce in January 2006 and their divorce was final last August.