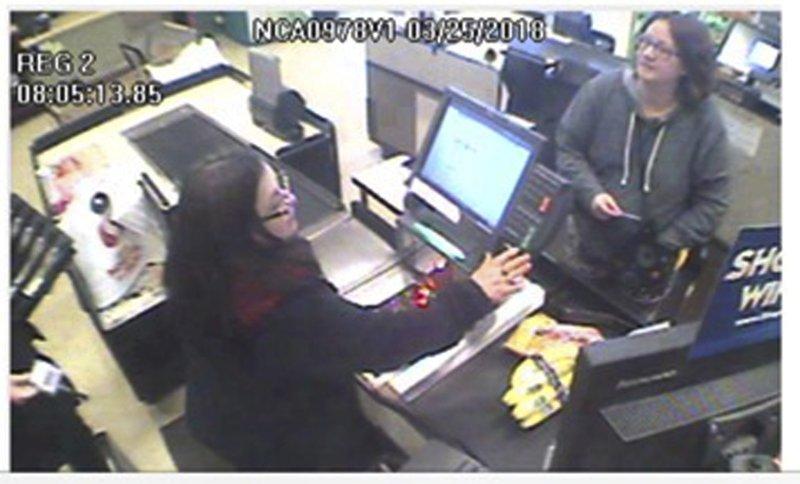 MENDOCINO COUNTY, Calif. -- Authorities are investigating whether a surveillance video from a store in Fort Bragg, California, shows a Washington state mother the day before her family's SUV was found at the bottom off a cliff along the Pacific Coast at a scenic viewpoint.

Mendocino County Sheriff Lt. Shannon Barney told The Oregonian/OregonLive Tuesday the woman in the video taken from a Safeway store looks like Jennifer Hart, but that the footage is "very grainy." California Highway Patrol investigators are working with the FBI to try to enhance the video.

Sarah and Jennifer Hart were found dead at the crash scene March 26 along with three of their children,19-year-old Markis, 14-year-old Jeremiah and 14-year-old Abigail.  Three other children, 15-year-old Devonte, 16-year-old Hannah and 12-year-old Sierra, remain missing.

Mendocino Sheriff Tom Allman told CBS affiliate KOIN there is "every indication" all 6 children were inside the SUV when it plunged over the cliff.

On Sunday, authorities disclosed that data from the vehicle's software suggested the crash was deliberate. They said the SUV had stopped at a pull-off area before accelerating straight off the cliff near Mendocino, California.

Wednesday, a massive search was underway along the rugged coastline, organized by the Mendocino County Sheriff with help from other agencies, including the California Highway Patrol, which lent its helicopter. Law enforcement and volunteers were expected to search about 20 miles of the shoreline by land, air and sea, from the crash site to the Fort Bragg area, reports KOIN.

The search area is expected to span from the Noyo Harbor to the MacKerricher State Park. The location was determined based on an ocean current and drift pattern analysis conducted by the U.S. Coast Guard, the sheriff's office told KOIN. A further search will be conducted from the crash site with focus to the south, the station reports.

Meanwhile, investigators continue to try to piece together the family's last movements. The highway patrol said investigators believe the Hart family was in or around Newport, Oregon, at about 8:15 a.m. March 24 and that they continued traveling south until reaching the area of Fort Bragg, California that evening. The family stayed in that area until the next evening, officials said.

Authorities believe the crash was intentional because of air bag evidence and because there was no tire friction by the cliff's edge, reports CBS affiliate KOIN. A California Highway Patrol spokesperson said the SUV came to a stop 70 feet from the edge -- about 5 feet off the highway -- before it accelerated and plunged off the cliff.

The SUV's speedometer was  pinned at 90 mph, though it's not clear whether the vehicle was going that fast before the crash.

Three days before the fatal crash, social service authorities in Washington state had opened an investigation apparently prompted by a neighbor's complaint that the children were being deprived of food.

An uneven portrait of the family has emerged from the accounts of friends and neighbors, some of whom said the two women were devoted mothers who were often seen attending local rallies and marches with their children.

But a former friend told The Associated Press Tuesday that she told Oregon child welfare officials in 2013 that Jennifer and Sarah Hart had been depriving the kids of food as punishment. In a statement, Alexandra Argyropoulos said she "witnessed what I felt to be controlling emotional abuse and cruel punishment" toward the six children.

Argyropoulos said she was told after she made the report that Oregon officials had interviewed the children but it was apparent that each child had been coached by their mothers on what to say. She said she was told there was nothing more the Oregon Department of Human Services could do because there was not enough evidence to make a case.

"My heart is completely broken. The current system failed to protect these children from their abusers," Argyropoulos said.

Authorities have said social services officials in Oregon contacted the West Linn Police Department about the family in 2013 while they were living in the area. Police referred media questions to the Oregon Department of Human Services, which cited privacy laws in refusing to say whether the agency was involved.

Argyropoulos said she was unaware of the 2011 domestic assault charge against Sarah Hart. She said she had met the couple on Facebook, knew them for about eight months and that the family visited her in the Bay Area twice. The couple broke off contact with her after she voiced concerns to them about their treatment of the children, she said.

Two weeks ago, Bruce and Dana DeKalb, next-door neighbors of the Harts in Woodland, Washington, called state Child Protective Services because the couple's 15-year-old son Devonte had been coming over to their house almost every day for a week, asking for food.

Dana DeKalb said Devonte told her his parents were "punishing them by withholding food." The boy asked her to leave food in a box by the fence for him, she said.

Devonte, who is still missing, drew national attention after he was photographed in tears while hugging a police officer during a 2014 protest.