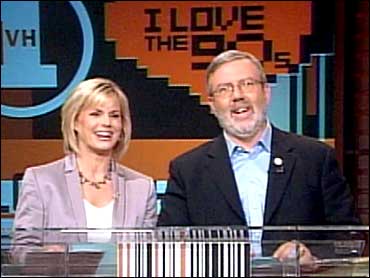 As VH1 premiers the final episode of its "I Love The 90s" series, The Early Show wrapped up its '90s trivia challenge with a look at movies.

Interestingly, Maltin was a "Jeopardy!" answer that current "Jeopardy!" champ, Ken Jenningsmissed. And Rutter did not get the following question:

In 1996, a game show host beat up Adam Sandler in the film "Happy Gilmore." Who was it?
A) Alex Trebek
B) Bob Barker
C) Tom Bergeron

Harry Smith did! TAKE THE QUIZ and see how well you do.

Asked how many movies he has seen in his lifetime, Maltin says, "Thousands. I do an annual book, a paperback guide; we have almost 19,000 reviews in there. I have written a lot of those."

Harry Smith won a set of movies from Miramax of Oscar winners of the '90s and the "Jurassic Park" trilogy.