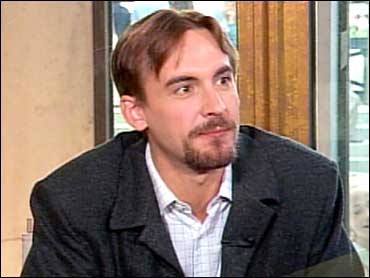 He's been called everything from "Ken, the Steamroller, to "Ken, the Destroyer."

On Thursday night, trivia whiz Ken Jennings continued his record-breaking ways on "Jeopardy!" winning for the 32nd straight time and adding to his more than $1 million in earnings.

But believe it or not, there is a former champ who has actually made more money on "Jeopardy!" That record belongs to 26-year-old Brad Rutter, at least for now.

He says, "When you won five shows, they used to give you a car or two cars, in my case. They would invite you back for the Tournament of Champions. I ended up winning that. About six months after that, they had [Super Jeopardy] the million dollar tournament, which I got invited to. I was fortunate enough to win that, too."

But he fully expects to see his record broken.

From what he has seen in Jennings, he says, it would be very difficult for the winning streak to end. "He could be on forever and ever," Rutter tells co-anchor Harry Smith.

What makes Jennings so good is "a deadly combination of broad-based knowledge and killer buzzer speed," Rutter says, adding that he is most impressed with Jennings' stamina.

Rutter says, "The way it worked out, all five of my shows were taped in one day. At the end of that day, I was exhausted. I can't imagine what I would have felt like if I had to come back the next day, let alone two more weeks."

Jennings has more than 30 shows under his belt. Typically in a day, they tape five shows a day, two days a week, Rutter explains.

So what would it take to dethrone Jennings?

"A strange combination of things," says Rutter. "The categories would have to line up in an unfriendly manner towards him. That's easier said than done."

Wednesday was the closest Jennings had to struggling with the questions. "He actually missed all three daily doubles," Rutter says. "He was betting big, too. That's part of the game. If you bet big on a daily double, you can hurt yourself."

Rutter notes, "It may take another one of those, plus a player who can beat him on the buzzer a few times. It will have to come down to somebody getting final Jeopardy right and Ken not getting it right."

The ideal person to beat him would be, "somebody who can stay with him on buzzer speed and has a similar broad base of knowledge. And a little luck, too. That's what it will take," Rutter says.

Rutter says he would like to play Jennings at some point. "I'm just excited because it's great for the show, actually. The more people are watching, the longer it will continue. The better chance I have of going back; it's what I would love to do."

Winning on "Jeopardy!" allowed Rutter to quit his job at a record store and now he has his own show for high school quiz bowl teams.