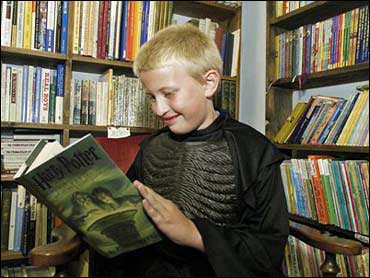 After all the hype and midnight madness, "Harry Potter and the Half-Blood Prince" is proving as much an event to read as to buy.

Critics are calling it the most moving and mature of J.K. Rowling's fantasy series. The New York Times compared it favorably to "The Lord of the Rings," and the Los Angeles Times to "Charlotte's Web." The AP's Deepti Hajela called it a "powerful, unforgettable setup for the finale," Book VII, when the great Potter ride is expected to end.

"It'll be very sad when she finishes writing the books," said Agnes Jang, 16, a resident of Sydney, Australia, who came out Friday night dressed head-to-toe as a student of the Hogwarts School of Witchcraft and Wizardry.

"But Harry has to move on."

With a major character dying, tears may well break out around the globe over the next few days, but the age of Potter VI dawned at midnight Saturday with millions of smiles and a bit of a wink from Rowling. In Edinburgh, Scotland, the author emerged from behind a secret panel inside the city's medieval castle, settled into a leather easy chair and read an excerpt from the sixth chapter to a super-select group of 70 children from around the world.

"You get a lot of answers in this book," Rowling, a resident of Edinburgh, said as she arrived at the castle before thousands of adoring fans. "I can't wait for everyone to read it."

It was party time for Potter lovers. Elisabeth Grant-Gibson, co-owner of "Windows a Bookshop" in Monroe, La., said they did more than double a normal good day's business. The first copy went to 10-year-old Chloe Kaczvinsky, whose parents drove 30 miles to attend the store's Harry Potter Pajama Party.

Her mother read the first chapter aloud during the ride home, and the second at home. Then her parents went to sleep. "I asked Mom if I could read the book in bed. I stayed up to 5 and woke up at 8," Chloe said.

In London, events were muted by the July 7 subway and bus bombings, which killed some 50 people. Book and magazine chain WH Smith scrapped a planned midnight launch at King's Cross Station, from whose fictional Platform 9@3/4 Harry catches the train to Hogwarts at the start of each term. The deadliest of the day's four attacks was on a subway near King's Cross.

Still, hundreds of thousands of fans turned out to purchase Potter.

In Dallas, about 200 of the faithful waited in the dark, mingling in an unlit parking lot, after storms knocked out power at a Barnes & Noble store. White horses posing as unicorns paraded down the main street of Wilmington, Ohio, where Books 'N' More quickly sold hundreds of Potters.

Since Rowling first introduced Harry and his fellow students at Hogwarts to the world in 1997, the books have become a global phenomenon, selling 270 million copies in 62 languages and inspiring a series of movies. Rowling is now the richest woman in Britain, with a fortune estimated by Forbes magazine at $1 billion.

With only brief interruptions, "Half-Blood Prince" has topped the charts of Amazon.com and Barnes & Noble.com since last December, when Rowling announced that she had completed it. Pre-orders worldwide were in the millions and even the audio book has been keeping pace with such blockbusters as Dan Brown's "The Da Vinci Code" and David McCullough's "1776."

The biggest glitch happened in Canada, where publisher Raincoast sought a court injunction after a Vancouver store accidentally sold 14 copies last week. A judge ordered customers not to discuss the book, copy it, sell it or read it before its release.

The biggest gripes came in the U.S., not from critics, but from booksellers and environmentalists. Independent retailers were upset with Scholastic for selling the book on its web site at a 20 percent discount, more than many stores can afford. Environmentalists, meanwhile, were unhappy that Scholastic, unlike Raincoast, doesn't print the books on 100 percent recycled paper.

"We have some magic up our sleeves too," reads a message posted on the Web site of Greenpeace, "a link to the Canadian publisher of `Harry Potter and the Half Blood Prince,' who can send you a tree-friendly version of this popular book."