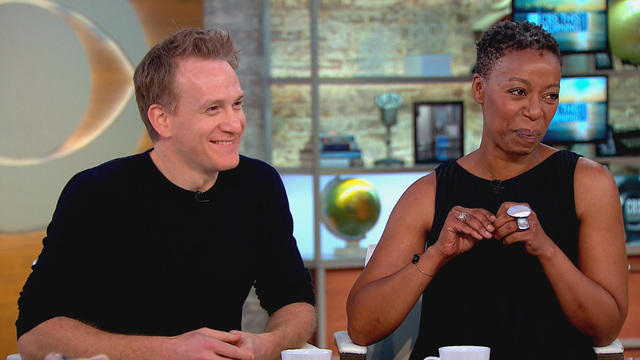 In the final scene of the last "Harry Potter" movie, Harry, Ron, and Hermione send their children off to Hogwarts School of Witchcraft and Wizardry – and that's where the new Broadway play "Harry Potter and the Cursed Child" picks up. J.K. Rowling's beloved characters are adults and their children are off having their own adventures at Hogwarts.

But the rest of the play's plot is shrouded in secrecy – a secrecy that's been miraculously maintained by fans since the play's original run in London's West End. Jamie Parker, who plays Harry Potter, and Noma Dumezweni, who plays Hermione Granger, have a theory that it has something to do with the kind of person who loves the series.

"A lovely version of that is because you kind of go, 'Why would you be cruel to somebody else? Why would you spoil someone else's fun?'" Dumezweni told "CBS This Morning" on Tuesday.

"Doesn't that give you hope?" Parker chimed in. "We're talking about the bestselling literary series ever written…. Which fundamentally has kindness at its – at the heart of its narrative. That gives me a lot of hope because it's our narratives and our fictions that allow us to build the institutions by which we can cooperate in gigantic numbers."

The two-part, five-hour play is nominated for 10 Tony Awards and it already won a record nine Olivier awards in England. That includes Tony nominations and Olivier wins for Parker and Dumezweni. For Parker, the play is about Harry becoming a parent when nobody's ever really taught him how.

"Harry's nearly twice the age that his father ever made it to in this play. So, you know, with no role models in there -- everybody keeps dying on him. So, you know, how does he do it?" Parker said.

Dumezweni's casting made headlines and, as "CBS This Morning" co-host Gayle King put it, had some people "clutching their pearls." Dumezweni is black and Hermione has always been portrayed by a white person.

"Why was that Gayle, why was that?" Dumezweni joked.

"I love the work that I do. I'm a woman of color and I got the job. And that's the biggest privilege I could have. How other people dealt with it is other people's stuff," she said. "It's 2018….We're just doing our jobs."

For Parker, who faced the task of portraying one of the world's most beloved and well-known characters, the strategy is simple: just get out of the way.

"I mean, I can only think of one other example are you get seven volumes of back story before you come on stage with you," he said. "The main thing is just kind of the blueprint is there….Because when do you ever have an audience that's this big and this hungry to make this sort of theatrical reality take flight? And they come in and their imaginations are ready to go."