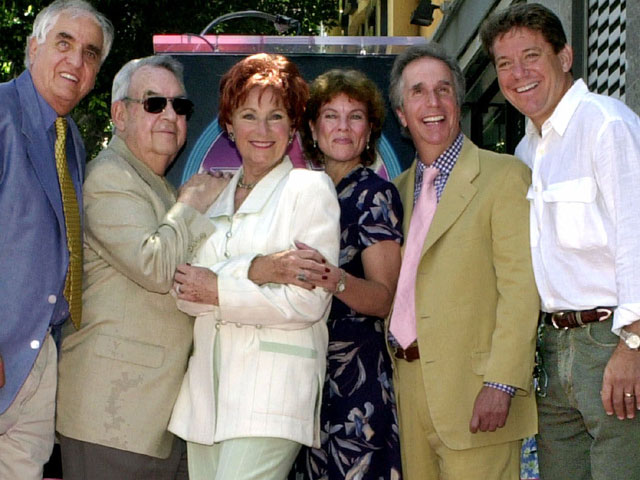 (CBS) This is the perfect time to mention that bad jokes like "'Happy Days'? More like 'Sad Days'" are unavoidable.

Four "Happy Days" cast members and Tom Bosley's estate are suing CBS, which owns the show, claiming they're owed merchandizing revenues due them under their contracts.

CNN reports that Anson Williams (Potsie), Don Most (Ralph), Marion Ross (Mrs. Cunningham) and Erin Moran (Joanie Cunningham) claim they've been cut out of the "Happy Days" "merchandising bonanza." CNN reports that some of that merchandise appears in the form of trading cards, comic books, greeting cards and DVDs. And that's just a short list of products.

The actors' contracts state they were to be paid 5 percent from net merchandizing proceeds for sole image use and 2.5 percent for group images, less a 50 percent "handling fee," reports CNN.

The lawsuit was filed Tuesday. Ron Howard, who played Richie Cunningham, and Henry Winkler, who played The Fonz, are not part of the lawsuit.

An attorney for the actors said there's breach of contract because CBS broke a promise to pay the actors and fraud because it purposefully didn't pay.

CBS said in a statement to CNN, "We agree that funds are owed to the actors and have been working with them for quite some time to resolve the issue."

The actors say they're owed millions of dollars. CBS says thousands. The launch of the "Happy Days" slot machine was apparently the last straw.

"When these slot machines came out, it was like Barnum and Bailey came to town," Williams told CNN. "We were bombarded with, oh look at these pictures, they'd be all over the country."