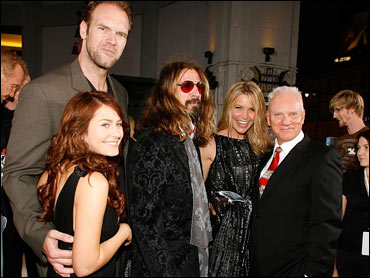 Rob Zombie's new take on John Carpenter's 1978 horror sensation "Halloween" slashed its way to a $31 million haul over the four-day weekend, surpassing the $20.1 million gross for 2005's "Transporter 2," which had held the record for best Labor Day opening.

Released by the Weinstein Co. and MGM, "Halloween" also topped the $29 million Labor Day gross for 1999's "The Sixth Sense," which had been the biggest-grossing movie over the holiday. That blockbuster ghost story was in its fifth weekend when Labor Day came around.

Sony's comedy "Superbad," the No. 1 movie the previous two weekends, slipped to second place with $15.6 million, raising its total to $92.4 million.

Focus Features' "Balls of Fury," a comedy about a washed-up ping pong player recruited by the feds to help bring down a criminal mastermind (Christopher Walken), opened at No. 3 with $13.8 million.

"'Halloween' was far beyond anything we've seen on Labor Day," said Paul Dergarabedian, president of box-office tracker Media By Numbers. "It was just a perfect ending to a perfect summer. Hopefully, we can do this every year."

The industry finished the summer season with record receipts of $4.18 billion since the first weekend in May.

Factoring in higher ticket prices, though, movie attendance did not set a record. Media By Numbers estimates 610 million tickets were sold, the fifth-best admissions figure for modern Hollywood.

Unlike Carpenter's original, Zombie's "Halloween" delved into the childhood of unstoppable slasher Michael Myers to explain why the masked madman wages his own personal war of terror.

"Carpenter's genius was in not giving the back story, so you had this force of evil unto itself," said Bob Weinstein, co-founder of the Weinstein Co. "Rob was more like, what's behind the evil? I think the fan base loved the idea that there'd be a new version that would also add something to it."

"Halloween" will turn a tidy profit even if it follows the pattern of most horror films and drops off quickly in subsequent weekends. The movie was shot on a modest $15 million budget, meaning it took in twice its production costs in just four days.

The movie was a renewed success for the horror genre, which had hit hard times with a few underperforming releases earlier this year, among them "Hostel II."

"It's funny how Hollywood keeps writing things off," said Weinstein, whose company also scored a summer success with the supernatural tale "1408." "After `Hostel II,' they said horror's done. Horror's not done. If there's something unique in the story, nothing's done."

Estimated ticket sales for Friday through Monday at U.S. and Canadian theaters, according to Media By Numbers LLC. Final figures will be released Tuesday.