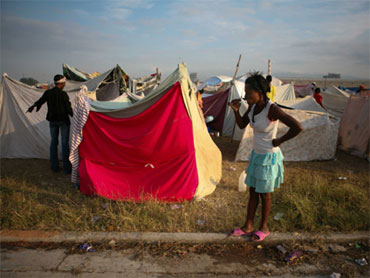 Within days, the government will move 400,000 people made homeless by Haiti's epic earthquake from their squalid improvised camps throughout the shattered capital to new resettlement areas on the outskirts, a top Haitian official said Thursday.

Authorities are worried about sanitation and disease outbreaks in makeshift settlements like the one on the city's central Champs de Mars plaza, said Fritz Longchamp, chief of staff to President Rene Preval.

"The Champ de Mars is no place for 1,000 or 10,000 people," Longchamp told The Associated Press. "They are going to be going to places where they will have at least some adequate facilities."

He said buses would start moving the displaced people within a week to 10 days, once new camps are ready. Brazilian U.N. peacekeepers were already leveling land in the suburb of Croix des Bouquets for a new tent city, the Geneva-based intergovernmental International Organization for Migration reported Thursday.

The hundreds of thousands whose homes were destroyed in the Jan. 12 quake had settled in more than 200 open spaces around the city, the lucky ones securing tents for their families, but most having to make do living under the tropical sun on blankets, on plastic sheets or under tarpaulins strung between tree limbs.

The announcement came as search-and-rescue teams packed their dogs and gear Thursday, with hopes almost gone of finding any more alive in the ruins. The focus shifted to keeping injured survivors alive, fending off epidemics and getting help to the hundreds of homeless still suffering.

Some clinics say patients face a 12-day wait for care. There's a huge backlog at the airport, as well, with 1,400 flights on a waiting list for landing slots. Supplies are coming in to the capital, but they're not getting out to everyone who needs them, reports CBS News correspondent Bill Whitaker.

"We're so, so hungry," said Felicie Colin, 77, lying outside the ruins of her Port-au-Prince nursing home with dozens of other elderly residents who have hardly eaten since the earthquake hit on Jan. 12.

A melee erupted at one charity's food distribution point as people broke into the storehouse, ran off with food and fought each other over the bags.

As aftershocks still shook the city, aid workers were streaming into Haiti with water, food, drugs, latrines, clothing, trucks, construction equipment, telephones and tons of other relief supplies. The international Red Cross called it the greatest deployment of emergency responders in its 91-year history.

But the built-in bottlenecks of this desperately poor, underdeveloped nation and the sheer scale of the catastrophe still left many of the hundreds of thousands of victims without help. The U.S. military reported a waiting list of 1,400 international relief flights seeking to land on Port-au-Prince's single runway, where 120 to 140 flights were arriving daily.

"They don't see any food and water coming to them, and they are frustrated," said Prime Minister Jean-Max Bellerive.

Four ships managed to dock at the capital's earthquake-damaged port, holding out the promise of a new avenue for getting aid to the city. A Danish navy ship was seen unloading crates. But the going was slow, since only one truck at a time could maneuver on the crack-riven pier.

The picture was especially grim at emergency medical centers, where shortages of surgeons, nurses, their tools and supplies have backed up critical cases.

"A large number of those coming here are having to have amputations, since their wounds are so infected," said Brynjulf Ystgaard, a Norwegian surgeon at a Red Cross field hospital.

Food was reaching tens of thousands, but the need was much greater. Perhaps no one was more desperate than the 80 or so residents of the damaged Municipal Nursing Home, in a slum near the shell of Port-au-Prince's devastated cathedral. The quake killed six of the elderly, three others have since died of hunger and exhaustion, and several more were barely clinging to life.

"Nobody cares," said Phileas Justin, 78. "Maybe they do just want us to starve to death."

In the first eight days after the quake, they had eaten just a bit of pasta cooked in gutter water and a bowl of rice each. On Thursday, they had a small bowl of spaghetti and five bags of rice and beans, and cooking oil, were delivered.

A dirty red sheet covered the body of Jean-Marc Luis, who died late Wednesday. "He died of hunger," said security guard Nixon Plantin. On Thursday, four days after The Associated Press first reported on the patients' plight, workers from the British-based HelpAge International visited and said they would help.

One by one, such deaths were adding to a Haitian government-estimated toll of 200,000 dead, as reported by the European Commission. It said 250,000 people were injured and 2 million homeless in the nation of 9 million.

At a building in the Carrefour neighborhood where the multi-faith Eagle Wings Foundation of West Palm Beach, Florida, was to distribute food, quake victims from a nearby tent camp suddenly stormed the stores and made off with what the charity's Rev. Robert Nelson said were 50 tons of rice, oil, dried beans and salt. Fights broke out as others stole food from the looters.

At least 124 people were saved by search-and-rescue teams that worked tirelessly since soon after the quake, the European Commission reported. But as hopes faded Thursday, so long after untold numbers were trapped in the debris, some of the 1,700 specialists, working in four dozen teams with 160 dogs, began demobilizing.

Joe Downey, a fire battalion chief from an 80-member New York City police and firefighter unit, said this was the worst destruction his rescue team had ever seen.

On Thursday, 18 hospitals and emergency field hospitals were working in Port-au-Prince. But the burden was overwhelming: Some quake victims have waited for a week for treatment, and patients were dying of sepsis from untreated wounds, according to Dr. Greg Elder, deputy operations manager for Doctors Without Borders.

The Haitian government asked that mobile clinics be set up in all of the more than 280 sites where Port-au-Prince's now-homeless have resettled in tents or in the open air on blankets and plastic sheets.

Doctors warned, too, of potential outbreaks of diarrhea, respiratory-tract infections and other communicable diseases among hundreds of thousands living in overcrowded camps with poor sanitation. A team of epidemiologists was on its way to assess that situation, the Pan American Health Organization said.

The U.S. Navy hospital ship Comfort, which dropped anchor Wednesday outside Port-au-Prince harbor, should help significantly. It was reinforcing its crew to 800 doctors, nurses and medical technicians, increasing its hospital beds to almost 1,000, and boosting its operating rooms from six to 11 in the next few days, the Navy said.

The Navy and U.S. Coast Guard, taking over a small police port as a triage center, were helicoptering injured out to the Comfort on Thursday. "I'm hoping to get nearly 200 out today," said Lt. Cmdr. Andrew Grabus, in charge of the landing zone where more than 30 choppers were in action.

Nervously waiting to be airlifted with her 1-year-old boy to the Comfort, Shamaelle Gelin, 22, said his fractured leg had gone untreated for a week and was badly infected. She was a "bit scared" about her first flight and shipboard experience, "but of course I'll stay with him," she said.

Almost $1 billion in foreign aid has been pledged to help Haiti recover from the quake, and the White House said the U.S. share has climbed to about $170 million.

The U.N. World Food Program said it has delivered at least 1 million rations to about 200,000 people, with each ration providing the equivalent of a daily three meals. In the coming days, it plans to deliver five-day rations to 100,000 people a day, it said. The U.S. military said it was resuming air drops of water and meals on parachute pallets into zones secured by U.S. troops.

On a hillside golf course overlooking Port-au-Prince, where a U.S. 82nd Airborne Division unit set up its aid base, a tent city of tens of thousands grew daily as word spread that the paratroopers were distributing food.

Beyond the capital, closer to the quake's epicenter to the southwest, hundreds of Marines and Canadian troops were deploying around Leogane and Jacmel.

More than 2,600 U.S. soldiers, Marines and airmen were on the ground in Haiti, and more than 10,000 sailors and others were offshore. The number on the ground was expected to grow to 4,600 by the weekend.

In view of continuing looting and violence, American forces were expected to reinforce the long-established U.N. peacekeeping force here in escorting aid convoys. The U.N. was adding 2,000 peacekeepers to the 7,000 already in Haiti, and 1,500 more police to the 2,100-member international force.