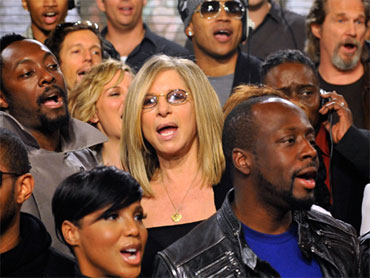 When Kirk Franklin saw the devastation caused by the earthquake in Haiti, he immediately reacted through song. In a matter of days, the Grammy-winning gospel star enlisted some of the genre's top stars to record a charity single to help with relief efforts.

"You want to respond based on what it is you know to do," he said of "Are You Listening," recorded by more than two dozen artists under the moniker Artists United for Haiti.

They were hardly the only ones. Since the Jan. 12 earthquake, there has been a flood of musical odes and projects for Haiti. While other tragedies have inspired telethons, concerts and charity songs, it seems as if Haiti's misfortune has caused a musical overflow.

There's the all-star "We Are the World" remake that debuted at No. 2 on the Billboard Hot 100 chart (there is also a Spanish-language version with Latin stars); the Jay-Z, Bono, The Edge and Rihanna charity single, "Stranded (Mon Amour Haiti)"; the Simon Cowell-produced remake of "Everybody Hurts," featuring Susan Boyle, Mariah Carey, Michael Buble and others; the digital album "Download to Donate for Haiti," featuring unreleased tracks by Jack Johnson, the Dave Matthews Band and others, presented by the Linkin Park-led Music for Relief; the Nas and Damian Marley song "The Strong Will Continue"; and Eddie Vedder's remake of "My City of Ruin."

Retail store American Outfitters and Filter magazine have released a music CD for Haiti available in all American Eagle stores, and Jamaican artists including Maxi Priest and Barrington Levy and Toots have put out the single "Listen2theCall." There's also the "Hope for Haiti Now" CD, featuring music from the telethon, which was a top seller on iTunes; several songs from the telethon rose on the Billboard charts.

"I know there's a lot of people on it, but that's not a bad thing," said Quincy Jones of the musical efforts for Haiti. He orchestrated the first "We Are the World," session 25 years ago, and the latest rendition, which features Barbra Streisand, Lil Wayne, Miley Cyrus, Wyclef Jean and dozens of other music stars.

"It's the kind of thing everybody should contribute to and let everything fall where it may," Jones said.

Among the songs available on Amazon.com is will.i.am's remix of The Who's "My Generation," featuring Slash.

"The response has been very strong from the music community," said Kristin Smith, senior manager of digital music at Amazon, comparing the artistic output to that seen after the tragedies of Katrina and 9/11. "It has been very generous in terms of what artists have done."

It's also come about very quickly. Linkin Park's Mike Shinoda managed to cobble an entire album of new material for the organization Music for Relief in a matter of days with help from other artists who donated tracks for the project.

"It really showed that if you really want to do something and time is of the essence, the music industry can really mobilize and get something great together quickly," he said. "That's a product of people's will to do it and it's a product of the technology that we've got at our fingertips."

David Saltzman, executive director of the Robin Hood Foundation and one of the advisers for the "Hope for Haiti Now" telethon, said there are more musical efforts today to help Haiti than for past tragedies because of how easy it is to record and share music.

"More artists who feel compelled to do something can get their music in the hands of people who are excited about purchasing it and saving lives," he said.

But Franklin wonders if it can be too much and worries that with a multitude of releases, some good efforts might get lost.

"Sometimes, when we have too many, when it becomes too fragmented, sometimes it can lose its power," he said. "But you've still got to let people move and do what's in their hearts. You've got to do what's in your heart and not respond to the numbers."

Shinoda said he had some concerns that his project, which is still being added to by artists online, could get lost, but thinks that fans who know what they want will find it.

Carlos Santana, who was on the "We Are the World" remake, thinks it can never be too much if it's helping save lives.

"The tsunami or Katrina or this situation experienced in Haiti," he said, is an indication "for all of us as humans to take care of one another. There will be other ones and anything we can use with music ... is always welcomed. It's never enough to be of service to humanity. It's never enough."
By NEKESA MUMBI MOODY