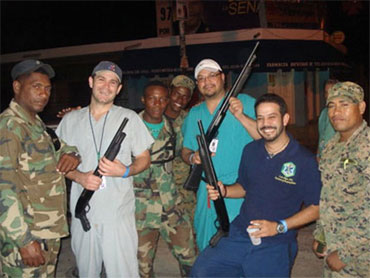 Puerto Rican medical doctors who appeared on Facebook posing with guns and Haitian earthquake victims are under investigation for possible ethics violations, the U.S. territory's health secretary said Saturday. One was expelled from his political party for unstatesmanlike behavior.

"My main concern is the transmission of a picture of a patient not knowing whether there was an attempt for informed consent," said Gonzalez, who noted that he is collaborating with the Puerto Rican Association of Physicians and Surgeons in the investigation.

Association president Eduardo Ibarra, speaking by telephone from Haiti, declined to comment extensively. "It's a difficult situation," he said.

A statement released by the association noted that "a small minority" of roughly 65 doctors who were sent to treat earthquake victims "displayed behavior ... that did not meet the highest standards of the medical profession." The statement did not say exactly how many doctors appeared in the photos.

"We wish to respectfully ask forgiveness ... for the unfortunate events described and widely disseminated, which we are sure added pain and sadness to the enormous suffering," said the statement, which praised the majority of the doctors for helping quake victims and possibly saving dozens of lives.

In some of the photographs, smiling physicians appear in medical scrubs, holding guns borrowed from Dominican soldiers. In another, a doctor grins as he holds a saw next to a victim's leg, and a colleague mugs for the camera as he holds up the injured arm of an earthquake victim. Yet others show the doctors holding up condoms, drinking beer, or smiling as they stand beside a coffin.

One picture depicts a prostrate quake victim wearing nothing but a shirt and a small strip of cloth over the genitals.

The president of the Puerto Rican Senate called for the names of the doctors to be made public, a motion supported by Julissa Nolasco, president of the Health Committee of the House of Representatives.

"I hope they can provide an understandable explanation for such a regrettable act," she said.

The five soldiers who allowed the doctors to hold their weapons were arrested pending the investigation's outcome, Dominican Defense Minister Lt. Gen. Rafael Pena Antonio said in a statement.

More than 60 doctors from Puerto Rico have traveled to the Dominican Republic to treat victims transported there from Haiti following the neighboring country's 7.0-magnitude earthquake on Jan. 12 that killed an estimated 200,000 people.