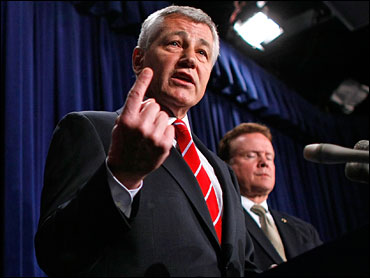 Republican Sen. Chuck Hagel said Friday he would consider serving as Democratic presidential candidate Barack Obama's running mate if asked, but he doesn't expect to be on any ticket.

Hagel's vocal criticism of the Bush administration since the 2003 invasion of Iraq has touched off speculation that if Obama were to pick a Republican running mate, it might be Hagel. Hagel said in an interview with The Associated Press that after devoting much of his life to his country - in the Senate and the U.S. Army - he would have to consider any offer.

In a book published this year, Hagel said that despite holding one of the Senate's strongest records of support for President Bush, his standing as a Republican has been called into question because of his opposition to what he deems "a reckless foreign policy ... that is divorced from a strategic context."

Hagel wrote in "America: Our Next Chapter" that the invasion of Iraq was "the triumph of the so-called neoconservative ideology, as well as Bush administration arrogance and incompetence."

He said Friday that he and Obama also have differences.

He hasn't endorsed Sen. John McCain of Arizona, the presumed Republican nominee, whom he calls a friend. Hagel said Friday he hadn't thought about who to vote for in November.

In a March appearance on ABC's "This Week, he said he and McCain have "some pretty fundamental disagreements on the future of foreign policy," including the Iraq war.

McCain has said his goal is to reduce U.S. casualties, shift security missions to Iraqis and, ultimately, have a noncombat U.S. troop presence in Iraq similar to that in South Korea. He has said that such a presence could last 100 years or more.

Sorensen, a Nebraska native, said Obama should pick a running mate who can help where he's weakest, and Hagel's national security experience makes him a logical candidate. Obama has a team managing the vetting process that includes former first daughter Caroline Kennedy, and Sorensen said he has spoken to her about the selection.

Hagel served as an Army sergeant in Vietnam and was twice wounded in 1968, earning two Purple Hearts.

He was the only member of his party on the Senate Foreign Relations Committee to support a nonbinding measure critical of Bush's decision to dispatch an additional 30,000 troops to Iraq.

"There is no strategy. This is a pingpong game with American lives," Hagel said at the time.

The rhetoric drew the public ire of Vice President Dick Cheney, who told Newsweek in January 2007 that Ronald Reagan's mantra to not speak ill of another Republican was sometimes hard to follow "where Chuck Hagel is involved."