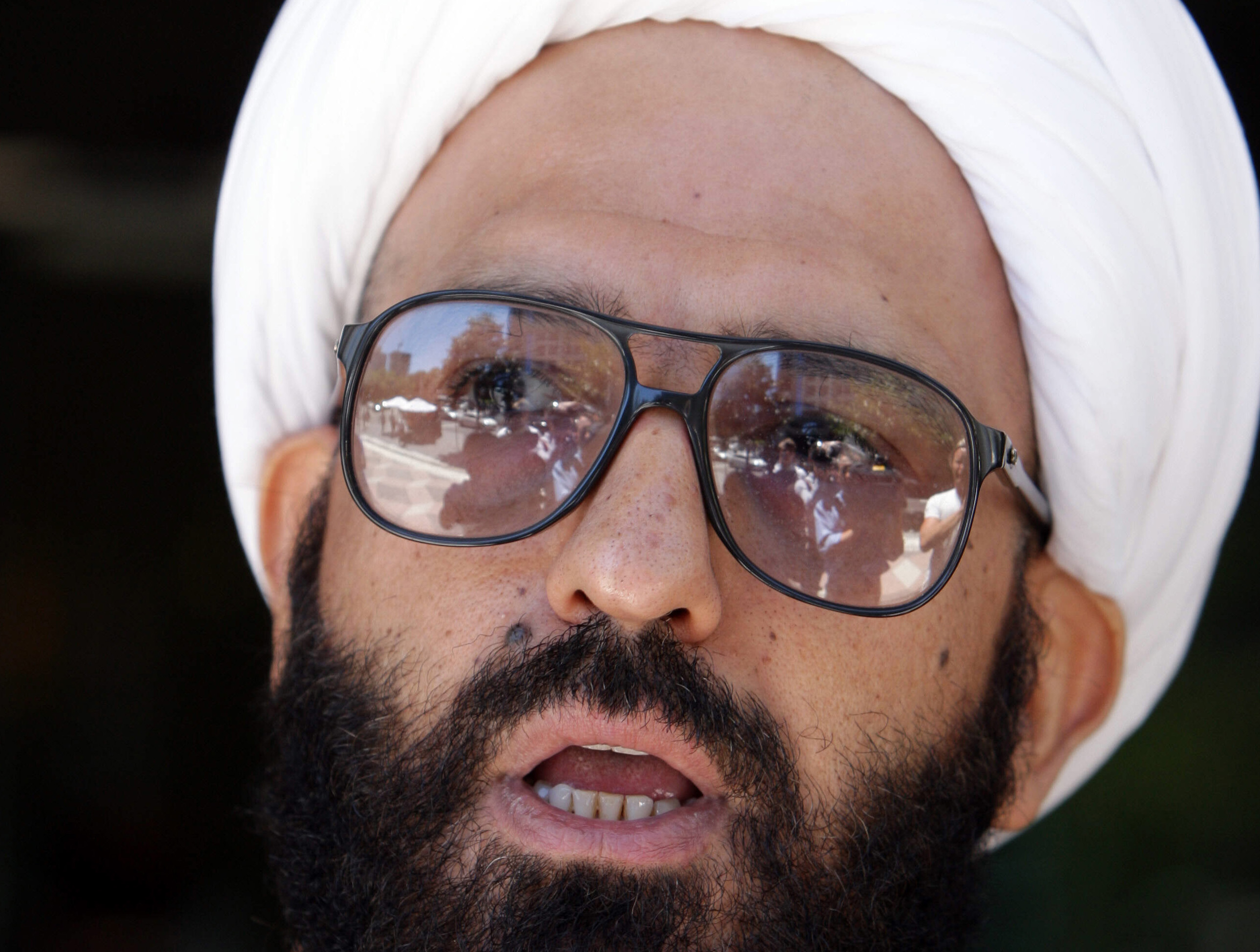 SYDNEY - The deadly siege began in the most incongruous of ways, on a sunny Monday morning inside a cheerful cafe in the heart of Australia's largest city. An Iranian-born gunman burst in, took 17 people hostage, and forced some to hold a flag with an Islamic declaration of faith above the shop window's festive inscription of "Merry Christmas."

It ended after midnight with a barrage of gunfire that left two hostages and the gunman dead, four others wounded, and a nation that has long prided itself on its peace rocked to its core.

A loud bang rang out, several hostages ran from the building and police swooped in amid heavy gunfire, shouts and flashes. A police bomb disposal robot also was sent into the building, but no explosives were found.

"They made the call because they believed that at that time, if they didn't enter, there would have been many more lives lost," Scipione said.

The gunman was identified as 50-year-old Man Haron Monis.

He'd previously disclosed that Monis had "a long history of violent crime, infatuation with extremism and mental instability."

Monis once was prosecuted for hate mail to families of Australian troops killed in Afghanistan, CBS News reported. He was convicted and sentenced to 300 hours of community service. At the time, Monis said his letters were "flowers of advice," adding, "Always, I stand behind my beliefs."

He had also been charged with sexual assault and with being an accessory to his ex-wife's murder. He was out on bail.

Monis sought asylum in Australia in 1996 and assumed a new identity. He was well known to authorities. A self-proclaimed sheik, he sometimes protested publicly on Sydney's sidewalks, posting videos to his own YouTube channel.

Scipione wouldn't say whether the two hostages who were killed - a 34-year-old man and a 38-year-old woman - were caught in crossfire, or shot by their captor. Among the four wounded was a police officer shot in the face.

One of the victims was Sydney lawyer and mother-of-three Katrina Dawson.

The second victim, store manager Tori Johnson, 34, is being hailed as a hero -- he was killed as he tried to wrestle a gun from Monis.

Officials rolled one gurney out of the cafe carrying what appeared to be a man draped in a blood-soaked sheet with a bloody handprint in the center. Paramedics also carried away a woman with blood-covered feet.

"I can only imagine the terror that they've been through," Scipione said. "They are very brave people who in many cases were just buying a cup of coffee and they got caught up in this dreadful affair. We should reflect on their courage."

The prime minister also reflected on how an ordinary day turned terrifying.

"There is nothing more Australian than dropping in at the local cafe for a morning coffee, and it's tragic beyond words that people going about their everyday business should have been caught up in such a horrific incident," Abbott said.

While Monis' motivation for the attack was still unclear, Abbott confirmed he was "well-known" to state and federal authorities.

"He had a long history of violent crime, infatuation with extremism and mental instability," Abbott said. "As the siege unfolded yesterday, he sought to cloak his actions with the symbolism of the ISIL death cult. Tragically, there are people in our community ready to engage in politically motivated violence."

"This is a one-off random individual. It's not a concerted terrorism event or act. It's a damaged-goods individual who's done something outrageous," his former lawyer, Manny Conditsis, told Australian Broadcasting Corp.

"His ideology is just so strong and so powerful that it clouds his vision for common sense and objectiveness," Conditsis said.

Flags were lowered to half-staff on the landmark Harbour Bridge as Australians awakened to the surreal conclusion of the crisis. The state's premier expressed disbelief that the attack could happen in Australia - a place he dubbed "a peaceful, harmonious society which is the envy of the world."

The siege began about 9:45 a.m. in Martin Place, a plaza in Sydney's financial and shopping district that was packed with holiday shoppers. Many of those inside the cafe would have been taken captive as they stopped in for their morning coffees.

Hundreds of police flooded the city. Streets were closed and offices evacuated. The public was told to stay away from Martin Place, site of the state premier's office, the Reserve Bank of Australia, and the headquarters of two of the nation's largest banks. The state parliament house is a few blocks away, and the famous Sydney Opera House also is nearby.

Throughout the day, several hostages were seen with their arms in the air and hands pressed against the window of the cafe, with two people holding up a black flag with the Shahada, or Islamic declaration of faith, written on it.

The Shahada, which translates as, "There is no god but God and Muhammad is his messenger," is considered the first of Islam's five pillars of faith. It is pervasive throughout Islamic culture, including the green flag of Saudi Arabia. Jihadis have used the Shahada in their own black flag.

Channel 10 news said it received a video in which a hostage in the cafe had relayed the gunman's demands. The station said police requested they not broadcast it, and Scipione separately asked media that might be contacted by the gunman to urge him instead to talk to police.

Australian Muslim groups condemned the hostage-taking in a joint statement and said the flag's inscription was a "testimony of faith that has been misappropriated by misguided individuals."

In a show of solidarity, many Australians offered on Twitter to accompany people dressed in Muslim clothes who were afraid of a backlash against the country's tiny Muslim minority of some 500,000 people in a nation of 24 million. The hashtag #IllRideWithYou was used more than 90,000 times by late Monday evening.

Seven Network television news staff watched the gunman and hostages for hours from a fourth floor window of their Sydney offices, opposite the cafe.

The gunman could be seen pacing back and forth past the cafe's windows. Reporter Chris Reason said the man carried what appeared to be a pump-action shotgun, was unshaven and wore a white shirt and a black cap.

Some of the hostages were forced up against the windows.

"The gunman seems to be sort of rotating these people through these positions on the windows with their hands and faces up against the glass," Reason said in a report. "One woman we've counted was there for at least two hours - an extraordinary, agonizing time for her, surely, having to stand on her feet for that long."

Lindt issued a statement saying it was "profoundly saddened and deeply affected about the death of innocent people."

"We are devastated by the loss of their lives and that several others were wounded and had to experience such trauma," said the statement from the Swiss company Lindt & Sprugli. "Our thoughts and feelings are with the victims and their families who have been through an incredible ordeal, and we want to pay tribute to their courage and bravery."

Australia's government raised the country's terror warning level in September in response to the domestic threat posed by supporters of the Islamic State group, also known as ISIL. Counterterror law enforcement teams later conducted dozens of raids and made several arrests in Australia's three largest cities - Melbourne, Sydney and Brisbane. One man arrested during a series of raids in Sydney was charged with conspiring with an Islamic State leader in Syria to behead a random person in Sydney.

The Islamic State group, which holds a third of Syria and Iraq, has threatened Australia in the past. In September, its spokesman Abu Mohammed al-Adnani issued a message urging attacks abroad, specifically mentioning Australia.

One terrorism expert said the situation appeared to be that of a "lone wolf" making his own demands, rather than an attack orchestrated by a foreign jihadist group.

"There haven't been statements from overseas linking this to extremist groups outside the country - that is quite positive," said Charles Knight, lecturer in the Department of Policing, Intelligence and Counter Terrorism at Australia's Macquarie University. "The individual or individuals involved didn't kill early, which is part of the pattern of some recent international attacks. ... It seems to be shifting more into the model of a traditional hostage situation, rather than the sort of brutal attacks we've seen overseas."