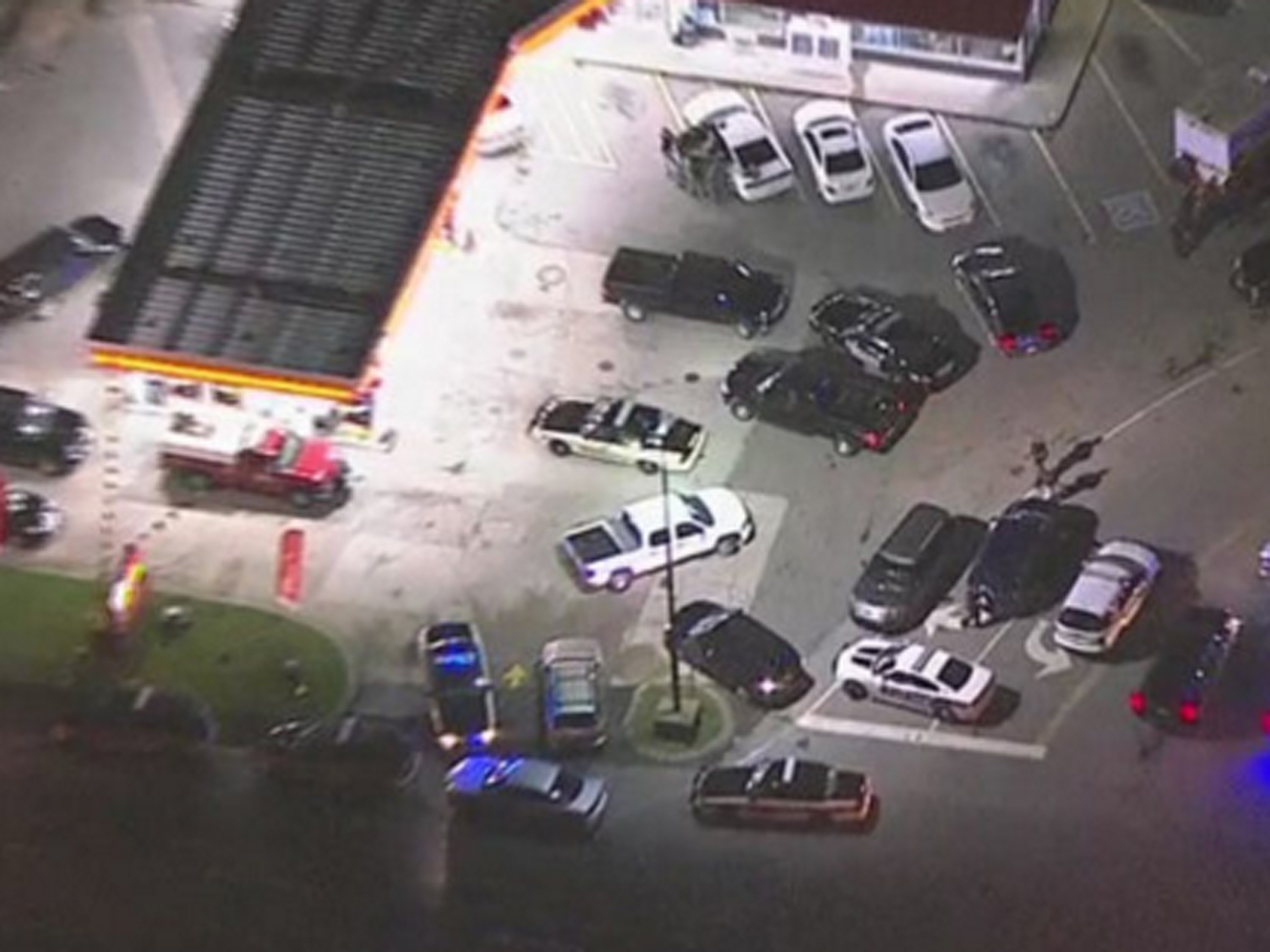 WHITE HOUSE, Tenn. -- A Kentucky fugitive accused of shooting at police in two states remained on the run, despite a five-day manhunt and a chaotic scene at a small-town Tennessee gas station that ended early Thursday with the arrests of two of his friends.

Floyd Ray Cook, a 62-year-old convicted rapist and robber, has eluded police since Saturday afternoon, when he allegedly shot and wounded a Tennessee police officer.

Two of Cook's known associates, both with lengthy criminal histories of their own, were arrested after a violent confrontation with U.S. Marshals in White House, Tennessee, on Wednesday night, Tennessee Highway Patrol Lt. Bill Miller told reporters.

Marshals, who joined the search for Cook earlier this week, spotted a car they believed to be associated with him at the gas station, just off Interstate 65 north of Nashville, according to the U.S. Marshal Service. An investigator approached the car and the driver attempted to flee, ramming two police cruisers and narrowly missing an officer on foot.

The officer fired a shot at the car. The Tennessee Highway Patrol initially reported Wednesday that the occupants of the car, which they then believed to include Cook, fired at the marshals. Miller said early Thursday that was inaccurate. Cook was not in the car at the time and the occupants did not fire on police.

The car careened down a dead-end street, through a fence and into a ravine, Miller said. The two people inside fled on foot into the surrounding cornfields.

Dozens of federal, state and local officers, along with helicopters and K-9 units, descended on rural Robertson County to aid in the hunt.

Police announced earlier this week that they believed Cook was traveling with 50-year-old Troy Wayne, described as an "associate" from Raywick, Kentucky, a town of 134 people 50 miles south of Louisville where Cook was last known to live.

The search team Wednesday night first found Wayne's girlfriend, 35-year-old Katy McCarty, drenched in water and mud in the field, Miller said. They later found Wayne in a nearby neighborhood. Both were arrested, though police did not specify the charges.

Cook is accused of shooting and wounding Algood, Tennessee, police Officer Ahscari Valencia during a traffic stop Saturday afternoon. Valencia was saved by his bulletproof vest.

Just over an hour later, a Kentucky State Police trooper recognized Cook's car and tried to stop him in rural Cumberland County, just beyond the Tennessee state line. Cook tried to speed away, but hit a tree and jumped from the truck on foot. He allegedly opened fire on the officer, missed and fled on foot into the woods.

Cook, with a criminal record that includes burglary, assault and rioting, was already wanted by the law. He was convicted of raping a 19-year-old in Marion County, Kentucky, in 1971, records show. He was required to register as a sex offender and remains on parole.

Cook's sex offender registration form lists an address in Lebanon, Kentucky. Several months ago, the Marion County Sheriff's Office, making routine checks on the sex offenders in the county, discovered he was no longer living there, said Sheriff Jimmy Clements. Deputies there took out a warrant for his arrest and started searching for him. They discovered he was living at an address in Raywick. They staked out the home but were never able to catch him.

Cook was also indicted in July on charges of first-degree trafficking in methamphetamine and tampering with physical evidence, according to Hardin County court records in Kentucky. He was scheduled for arraignment in August but did not appear. He is now also wanted on suspicion of attempted murder of a police officer in Tennessee and the manhunt stretched into a sixth day.

A swath of the border between Kentucky and Tennessee has been gripped with fear of the man authorities described as "armed, dangerous and desperate." A Kentucky school district