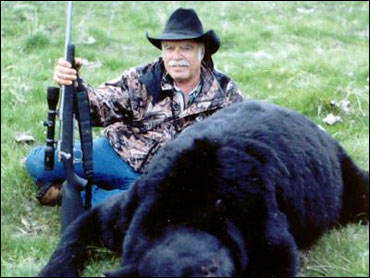 A self-described forester and wildlife biologist for 15 years, Jim Zumbo has written over 1,500 articles for all major outdoor magazines. He lives in a log cabin near Yellowstone National Park, and stars in cable TV shows about big-game hunting.

But it was his comment on Outdoor Life magazine's blog Feb. 16 that has caused his name to skyrocket across the blogosphere.

It all began when Zumbo wrote a blog post after a day of coyote hunting with officials from Remington, the arms manufacturer. He wrote that guides on the hunt told him hunters increasingly were using assault-style rifles in the field.

According to the Washington Post, Zumbo wrote: "Sorry, folks, but in my humble opinion these things have no place in hunting. We don't need to be lumped into the group of people who terrorize the world with them. I'll go so far as to call them 'terrorist' rifles.'"

The result? Despite apologizing and even saying he would use the assault-style rifle on his own hunt, according to the Washington Post, Zumbo was promptly fired as gun editor by Outdoor Life, for whom he'd written since 1962. His television show on the Outdoor channel was also canceled and long-term ties to a number of industry sponsors were severed. The NRA also suspended professional ties with him, despite his 40-year membership.

Was this justified? Many bloggers are outraged at the vitriolic reaction greeting Zumbo.

KTK at Lean Left called it a "shock-and-awe campaign against one of the best-known pro-gun figures." "Literally within hours and with no discussion, a collective decision was made to completely destroy one of their own most admired figures for a far-from-radical statement that other leaders acknowledge was not unusual or out of the mainstream, and that he himself immediately repudiated," KTK blogs.

Steve of the Black Bear Blog even ran his own survey, and 50 percent of responders said "no way" should he be fired. "With the speed of the Internet, Zumbo's 40-some-year career was shredded and discarded with a scary ring of intolerance," Rich Landers blogs at SpokesmanReview.com.

Some bloggers fault Outdoor Life for caving into the NRA and its sponsors. "Not a First Amendment issue? You bet it was. Instead of standing behind Zumbo, no matter what he said on his blog posting, the magazine fell to its knees in the face of the pressure," Allan Gregory writes at Conservation News.

I suspect this controversy won't be over anytime soon.

Who is the longest jailed journalist in this country? Someone you probably never heard of. Josh Wolf, a 24-year-old blogger, has spent more than six months behind bars in California for refusing to turn over a videotape he shot of a violent anarchist demonstration in San Francisco at a Group of Eight summit.

Wolf said he had an agreement with the people in the organization he was covering, but as the Washington Post reports, there are no confidential sources involved, and Wolf already sold part of the tape to local television stations.

Wolf also posted some of the clip on his blog, which has some questioning whether a blogger deserves the same protections as a mainstream journalist.

Will Bunch takes issue with a column by Debra Saunders in the San Francisco Chronicle, in which she asserts that Wolf is not a journalist. "Josh Wolf may hold some extreme views, but given the choices, I'd rather see a lot more journalists willing to speak truth to power (and willing to go to jail to protect that right) than journalists who not only are cowed by those in power, but bend over backwards to defend them," Bunch writes at Attytood.

But some say the whole debate about whether Wolf is a journalist is pointless. "Mark my words: if journalists really want to pick this historical moment to start existential wars amongst themselves, the profession is finished," Kirkunit blogs.

Howard Owens agrees the debate is an artificial one. "There's no reason this guy should be in jail. There shouldn't even be a debate over whether he's a journalist," Ownes blogs. "When the Josh Wolfs of the world can be jailed for exercising his or her constitutional rights, we're all in trouble, especially those of us who, as paid professionals, believe in the public right to know."

Perhaps it's also a cautionary tale for bloggers. "In the land of the free, blogging can be a hazardous business," Antony Loewenstein blogs. Indeed.

A site called AutoAdmit has come under fire for bad-mouthing some female law students. One woman claims the extreme free-speech policy of the message boards is harming her job prospects and those of her colleagues. Some well-qualified women aren't getting top job offers, they say, because of what would-be employers might read about them online.

AutoAdmit is run by a third-year law student at the University of Pennsylvania and an insurance agent. Some of the messages include claims about women's sexual activity and diseases, as well as a host of racist remarks. Buried amid a message board full of questions about law school admittance are questions about dating and the "hottest" female law student, just to name a few topics, and many are laced with racist comments.

Should these sites be regulated, some bloggers are asking. The issue has generated much debate in the blogosphere.

"It's true that the First Amendment allows negative and offensive speech to be heard, but it is generally limited in how it can hurt and interfere with other people's rights," Cindy Liou blogs at Cairns.

Still, some say blaming the Internet is misguided. "Too hot to be hired? Come on! What rational employer would deny you a job because idiots chatted about you on line in a way that made if obvious that the only thing you did was look good?," Ann Althouse blogs.

Ilya Somin agrees. "Even if law firm hiring committees did believe the comments, it seems unlikely that very many of them would reject the student's application for that reason," Ilya blogs at The Volokh Conspiracy. "Most big law firms care very little about associates' personal lives outside the office, so long as those associates are racking up the billable hours."

So, what recourse do would-be employees have? "It seems that a job candidate's only recourse is to 'self-Google' and discover negative comments and bring them to an employer's attention on an interview," Carolyn Elefant recommends at Law.com.

"If a firm accepts anonymous gossip as truth over a first-hand disavowal and rejects a candidate, then quite frankly, that firm isn't a place worth working."

But as Anna Ivey at The Ivey Files reminds us, "It's easy to hide behind free speech, but just because something is legal doesn't make it right."