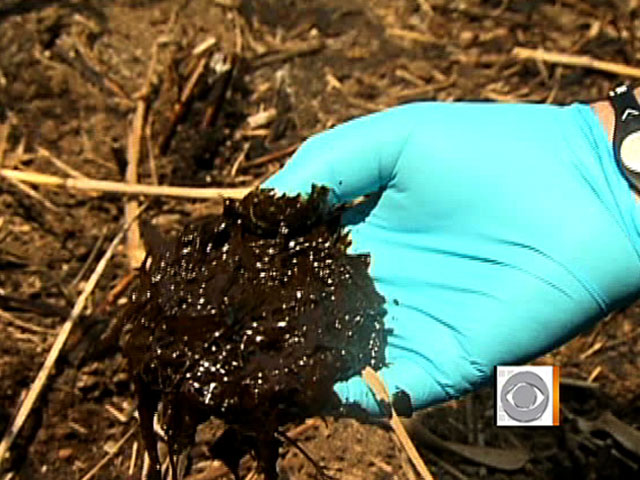 GRAND ISLE, La. - One year ago today, the Deepwater Horizon oil rig exploded in the Gulf of Mexico, and oil began leaking into surrounding waters.

It took nearly three months to shut down the well. Gradually, the enormity of the disaster became clear: two-and-a-half million gallons spewed every day, and in the end, more than 200 million gallons of oil had gushed into the Gulf.

CBS News correspondent Mark Strassmann, who covered the spill, reported Wednesday that oil can still be spotted in parts of the spill zone, such as Pass a l'Outre, La., where patches of oil still rise to the surface.

But Louisiana State University environmental scientist Ed Overton, who's studied the spill since Day One, says, "I don't think we're going to see any massive impacts as we go forward."

He says the Gulf's ecosystem is recovering more quickly than expected. "There were predictions the Gulf would become a dead and dying body for decades, maybe even centuries" Overton points out. "That's clearly not gonna happen."

But University of Georgia marine scientist Samantha Joye is much more pessimistic. She's studying 450 core samples, many of them thick sledge smothering the sea floor.

"(The BP spill has) really fallen off the radar, and people aren't thinking about it because they feel like, they've been told everything's fine, when it most certainly isn't fine," Joye says.

Business, Strassmann observes, has died for some in the Gulf, such as New Orleans oyster wholesaler Al Sunseri, who showed Strassmann a nearly empty cooler Sunseri says "would typically be full of sacks of oysters ... big, 100-pound sacks."

But at the Red Fish Grill in New Orleans, business is up ten percent, and fewer customers are questioning whether Gulf seafood is safe, according to owner Ralph Brennan.

And in Orange Beach, Alabama, Strassmann found more good news. It ordinarily has a $2 billion tourist business. Now. the oil's mostly gone, tourists are back, and Gulf Shores Tourism CEO Herb Malone says, "The more people we get to see for themselves, the more will return."

Strassmann predicted that, as time goes on, Gulf communities "will rebound closer to what they were before the spill. (Hurricane) Katrina proved something: This is one part of America that can take a punch."